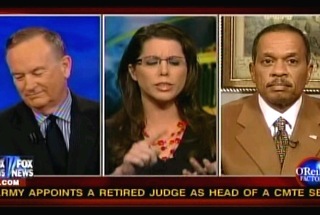 Two years into the Obama presidency, the issue of where he was born and what religion he follows somehow continues to be an issue for many on the far right, and now House Speaker John Boehner is coming under fire for telling NBC’s David Gregory that it’s “not my job” to dispel those rumors. Bill O’Reilly dedicated his regular panel with Juan Williams and Mary Katharine Ham tonight to the matter, railing passionately about why giving the matter airtime was destructive.

The trio, who usually get along quite well despite their regular disagreements, appeared testier than usual tonight from the get-go, with Williams firing the first shots and wondering why Gregory was being criticized when he wasn’t the first to bring the matter up– it was, he argued Brian Williams— and the Republicans appear unable to distance themselves from the birthers and those who believe the President is Muslim. O’Reilly argued that the question wasn’t in order because “I don’t think this has any traction at all” and that the fringe that believes such things don’t have an impact on policy. To that Williams countered that there were nine Congressmen trying to legislate based on those believes. “They’re pinheads,” O’Reilly retorted.

Ham came to the floor from a completely different direction, noting that the criticism of Speaker Boehner was illustrative of a “double standard” when Chris Matthews had called to see the President’s birth certificate and Bill Maher had noted he did not believe the President was Christian, but a secular humanist. Here Williams’ point applied more than O’Reilly’s, though the two did not intersect much– the problem, as Williams explained it, was the influence in Congress. Neither Matthews nor Maher have the kind of influence (or any, really) on Congress that Boehner has, nor are they elected. O’Reilly also continued to argue that the entire discussion did not matter, while Ham, in the process of O’Reilly rebutting her claims, appeared more impatient than usual, dramatically rolling her eyes while she waited to speak.

But while Ham was rolling her eyes and O’Reilly’s “straight talk” was somewhat elevated, the panel didn’t really lose their patience until Williams proposed that there was “coded language” in what the Speaker was saying, or at least in what he was refusing to condemn. At this point, O’Reilly cradled his forehead in rage and proceeded to insist, after six minutes of talking about it, that giving the issue any airtime was a complete waste. “The issue doesn’t matter,” he insisted, “it doesn’t matter. Sane, clear-thinking people understand that the President is not a Muslim and he wasn’t born in Indonesia or whatever they’re putting out there. So why does Meet the Press and NBC News take up valuable airtime to hammer a guy who has nothing to do with it?”

The discussion ended with O’Reilly telling Gregory off in the persona of Speaker Boehner, wondering why the Speaker hadn’t done the same. Not the most peaceful day on the ranch for this panel. The segment via Fox News below: