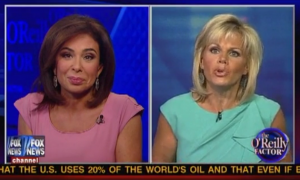 Bill O’Reilly and his panel tackled Glee on Thursday night, pondering whether the show is encouraging “alternative lifestyles.” Acknowledging the good messages of the show, Gretchen Carlson and Jeanine Pirro discussed the show’s appealing to the transgender population, and how much such plot points are included for “shock value.”

Here we go again, pandering to .3% of the American population that considers themselves transgender. Now I get to explain this to my 8-year-old, if i want her to see a nice family show with some nice music. By the way, in the same episode there were two cheerleaders who apparently are lesbians with each other and they put out a sex tape. And oh, by the way, there are two seniors who are engaged to get married to each other, so I get to explain that at the same time. They seem to have a positive message about hopes and dreams and taking risks. But why do they have to come up with these wild story lines to prove their point? I don’t get it.

Because, O’Reilly replied, teenagers have such short attention spans now, so shows need “shock value.” They’re watching it for the music, Carlson said, not to find out whether it’ll include something like a transgender story line.

Pirro said, from day one, the show has portrayed the types of characters that aren’t on other shows — whether that’s homeless, transgender, gay, handicapped, etc. Those who are in such a minority and watch the show can related to it, she said. It’s reality, they’re not making this up.

The problem, O’Reilly countered, is that if “unsupervised children” watch the show and see something like a sex tape, they might go out and experiment. “Do you really think this kind of thing is contagious?” Pirro asked incredulously. O’Reilly said when he was younger and saw James Dean smoking, it made him want to smoke.

Carlson chimed in, “I wholeheartedly believe in today’s society that kids are experimenting with homosexuality.” Pirro argued that you can’t parent a child’s sexuality.

They make these types of issues “glamorous,” O’Reilly said — adding that Glee is “undeniably” a good program.