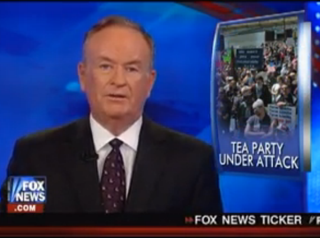 The various ways many on the left describe their distrust of the Tea Party seem to be growing ever more graphic– so argued Bill O’Reilly tonight in response to Rep. Andre Carson‘s comment that the Tea Party “wanted to see us [African Americans] hanging from a tree.” On a panel in which O’Reilly and talk radio host Tammy Bruce decried the comments, Alan Colmes was left to attempt to explain the rationale behind the comment, despite emphasizing he “wouldn’t use that language.”

Colmes began to respond to the comment with the above disclaimer, though adding that there was plenty of language on the right to justify the type of distrust it represented, citing in particular a public official calling President Obama a “tar baby” on a radio program– an example O’Reilly appeared unacquainted with. Nonetheless, O’Reilly argued that “you’ve had racist rhetoric in the United States since Columbus discovered America,” returning to the original question: “What good does this do to have a sitting Congressman say the Tea Party wants to see us hanging from a tree?”

Bruce countered that it is “indicative of the chaos and panic in Congress,” and of polls showing that Democrats’ approval ratings are falling, and argued that it demonstrated an attitude that went all the way up to the White House. “I’m not going to blame the administration for Andre Carson,” O’Reilly replied, arguing that he does not “set the tone for anybody.” That said, he was still grasping to see any justification for his language, which Colmes did not attempt to give, but only tried to contextualize the comment. “I’m a white guy, I’m not in that mindset,” he noted, but explained: “if you’re an African American and you hear this incoming from a group of people who are basically white, basically older, and there are a number of studies that have shown they are not particularly sympathetic to black people…”

Bruce then interrupted to add that the idea that Carson was suggesting “that this is what people in the black community want to hear right now when they don’t know how they’re going to pay the rent next month” was insulting, as “poverty and unemployment does not discriminate,” a point Colmes agreed with, but replied that it could coexist with his point. He didn’t seem to sway the panel too much on that front.