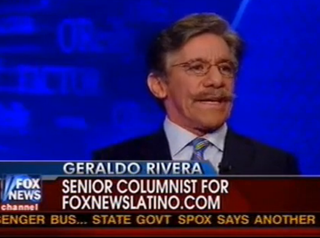 Last night’s O’Reilly Factor opened with its eponymous host positing a theory: a schism had begun to form in the mainstream media between hard news and ideological fare, with ABC News’ coverage of the Trayvon Martin tragedy reporting objectively, and NBC News providing a subjective take. After Bill O’Reilly warned NBC News was acting “dangerously” with its coverage, he turned to a veteran of both news organizations, Geraldo Rivera, for his take on the coverage.

“NBC has changed since I was there,” Rivera noted, particularly since “the creation of MSNBC– or, rather, the decision by MSNBC to choose ideological sides, generally and more specifically in this criminal action.” He argued that it was clear to him that, in the Trayvon Martin case, “they made an ideological decision that they would be on the side of the victim in this case and that they would argue strenuously for the prosecution of George Zimmerman… it’s not so much about the evidence as it is about the fact that a young, unarmed, black teenager was shot dead.”

O’Reilly protested to this attitude– “none of those people were there and they don’t know what happened”– but returned to his original point. “This big fissure between ABC News, who is doing hard news reporting and they come up with this startling shot of Zimmerman’s head covered in blood– that’s on channel 7, then you turn to channel 4… you get an ideological take,” he noted. He asked whether this would “taint the entire NBC News operation,” if the most slanted takes were still confined within MSNBC, an opinion network.

The conversation got a bit touchy when O’Reilly mentioned the head of news over at NBC during Rivera’s time, Tom Brokaw, who O’Reilly teased “didn’t like you.” He meant to make a serious point about that tension, however– that “the reason Brokaw undercut your career actively– that’s what he did to Geraldo– is because he thought you were a zealot. He thought you were doing what Sharpton does, an advocate rather than a reporter.” Rivera attributed this to it being a time before the “marketing decision” to become ideological had come down, when opinion was frowned upon still. That said, Rivera thought NBC was fine despite the association, “as long as they get an audience.”

As for the case itself, Rivera insisted that the media had done enough harm. “This never should have been a Murder-2 wrap,” he argued, “this was involuntary manslaughter at best.” O’Reilly objected to this, noting that Rivera was “doing the same thing on the other side.” Rivera tried to tell O’Reilly “I am agreeing with you” on the damage the media can do, but O’Reilly still considered Rivera dismissing the possibility of a conviction to be just as bad as the opposite claims. “I don’t know what they have, so I am going to withhold judgment,” O’Reilly concluded.