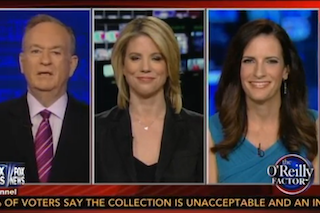 Bill O’Reilly threaded the data-gathering needle on The O’Reilly Factor Wednesday night, accusing Kirsten Powers of being on the cover of Fascism Weekly for her pro-NSA stance, then refusing to let Republican strategist Kate Obenshain pin the Bush-era programs on the Obama administration.

Powers pushed back against O’Reilly’s half-joke about her fascism, stating she had no problem with the NSA gathering phone metadata, but admitted she was “squishy” when it came to the storage of content.

“I’m not comfortable with the PRISM, and that’s what is taking up content,” Powers said. “I am comfortable, to a point, with the idea of a computer going through phone data getting connections, and then getting a warrant if they need to go any further. What I’m not comfortable with is storing data in perpetuity. I think that once they’ve sifted through it, if there is nothing there, then they should get rid of it. ”

“But here’s the problem,” O’Reilly said. “Lenny, out in Utah, who’s working for god knows what contractor, can go into those computers, pull down numbers, and find out where people are and have been…Believe me, these gnomes can do this kind of stuff.”

“That’s a fair criticism and that’s why I say I’m squishy,” Powers said. “I think it is something that you have to have extreme oversight for.”

“You have to sacrifice a little, I see that,” O’Reilly said. “But, okay, that argument is a philosophical argument—”

“I’m not defending the Obama people,” O’Reilly said, “because they’re taking on water big time, and they should. But all administrations take the truth and spin it around.”

“This isn’t spinning, Bill,” Obenshain said, attempting to get in a last word. “This is lying.”