O’Reilly Responds to George Will: He ‘Regurgitates Attacks’ from Reagan Loyalists 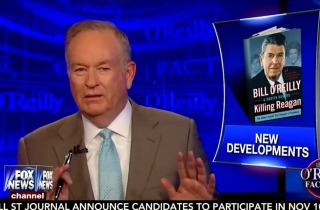 Bill O’Reilly responded to his Fox News colleague George Will on Thursday night after the syndicated columnist criticized O’Reilly’s book Killing Reagan, calling it a “tissue of unsubstantiated assertions.”

O’Reilly dedicated about a minute of his primetime Fox News show to a response to Will’s column, pointing out first that Will did not correctly distinguish between “slander” and “libel.”

“George Will regurgitates attacks on the book from Reagan loyalists who tried to get Killing Reagan spiked even before it was published, because they wanted a deification of the president, not an honest look at him,” O’Reilly said.

In his column, Will launched a blistering attack on the book, writing that O’Reilly uses little evidence to support many of his claims.

“The book’s perfunctory pieties about Reagan’s greatness are inundated by its flood of regurgitated slanders about his supposed lassitude and manipulability,” Will wrote in his column on Thursday. “This book is nonsensical history and execrable citizenship, and should come with a warning: ‘Caution — you are about to enter a no-facts zone.'”

O’Reilly said Will never called him before writing the column, and added that he holds no “ill will” against him. He invited Will to appear on Friday’s show.

This is not the first time O’Reilly was forced to defend his book. He called a Washington Post editorial written by four historians last month “almost comical” for its assertion that O’Reilly and his co-author made claims that are “discredited by the historical record.”