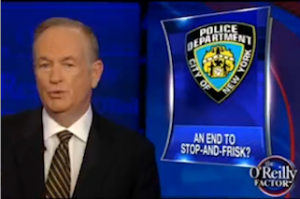 Tuesday night on The O’Reilly Factor, Bill O’Reilly focused in on the recent ruling from Judge Shira Scheindlin that could curtail the use of the NYPD’s controversial stop-and-frisk tactic. He said he doesn’t believe “for a second” that the NYPD is actively targeting minorities and thinks the only reason “the left” opposes it is because “black males are involved.”

O’Reilly began his debate with guest Jeffrey Lichtman by calling the defense attorney “desperately wrong” for his belief that the ruling won’t lead to “rising crime” in New York City. O’Reilly cited Chicago’s lack of stop-and-frisk as an explanation for its higher murder rate. “New York City, when it didn’t have this, had one the highest murder rates in the country,” O’Reilly argued, “and now it’s the lowest.”

Lichtman countered that all Scheindlin’s ruling is trying to do is get police to comply with the Fourth Amendment. He said that hasn’t been the case since the NYPD has admitted to conducting more than 200,000 stops without “reasonable suspicion.”

O’Reilly rejected the “presumption” that the NYPD is “going out every morning and targeting young black males,” adding, “I don’t believe that for a second.” Revealing that his grandfather was in the NYPD, O’Reilly said, “I know these guys as well as anybody… They know who the wise guys are they are not just walking around going ‘hey you, come over here.’ All right? They are trying to suppress violent crime and they are succeeding.”

“Yet Scheindlin and the left doesn’t like it,” O’Reilly continued, “because black males are involved. That’s why they don’t like it.”