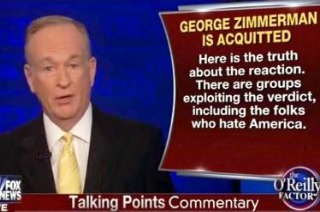 On Monday night, Fox News Channel host Bill O’Reilly tackled the issue of Americans protesting the not guilty verdict in the trial of George Zimmerman for the murder of Trayvon Martin. O’Reilly identified two groups protesting the outcome: Those that simply “hate America” and are using the issue to vent their preconceived hostilities toward the United States, and those who simply think the country is “flat-out racist.”

“There are two groups of people exploiting the Zimmerman verdict,” O’Reilly began. “The first are folks who simply hate America.”

O’Reilly then played a clip of an anti-Zimmerman protest. In that clip, one speaker rallied the crowd against what he determined to be the excessive influence of the Federal Reserve and “big banks” on policy-making and another exclaimed that justice is reserved for the “1 percent.”

RELATED: From ‘Numb’ To ‘Hallelujah’: The Best And Worst Twitter Reactions To The George Zimmerman Verdict

“The anti-American folks are using the acquittal of George Zimmerman to vent their hatred,” O’Reilly declared. “American in general had nothing to do with the death of Tryavon Martin. It was a calamity, not a product of policy.”

The Fox host identified the second group of victims who he said are “emotionally invested” in the verdict and “believe the country is flat-out racist.”

“That blacks and other minorities do not get fair play from the justice system, the economic system, or the social system,” O’Reilly added. “Many of these Americans are nursing personal grievances. Others are victims of the victim mentality.”

O’Reilly said that “fair-minded Americans” should recognize that the facts of the Zimmerman case prevented the jury from finding the defendant guilty of malice or recklessness in the killing of Martin beyond a shadow of a doubt.