O’Reilly Slams ‘Unconstitutional’ NSA Surveillance: ‘Should Be Shut Down Immediately’ 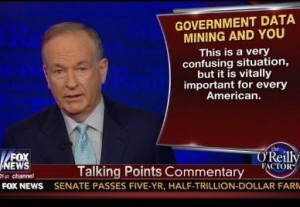 Bill O’Reilly admitted tonight he is conflicted about the revelations of widespread NSA surveillance, and while he does support the collection of cell phone metadata, he drew the line at the NSA’s internet monitoring and collection of private e-mails. O’Reilly declared that “seizing actual words of Americans” is “clearly unconstitutional,” saying that there’s too much danger in the government potentially abusing its power and declaring that the program “should be shut down immediately.”

O’Reilly said that Edward Snowden should be arrested, even if what he did ends up being a good thing, because it would set a bad precedent for people who leak secret government information. He explained the specifics of the program for viewers, warning that like in the IRS case, “corrupt government officials” could potentially exploit the information collected.

He pointed out that while the feds say they won’t go after individuals without probable cause, they can’t find probable cause unless they’re already looking through e-mails. O’Reilly noted how this story has made some very strange bedfellows, and told liberals who are surprised that President Obama is behind this that his entire administration is about “accumulating power for the feds.”

O’Reilly called the storage of phone metadata “questionable” but “permissible,” while “seizing actual words of Americans [is] clearly unconstitutional.” O’Reilly cited the Fourth Amendment and declared, “You can’t just seize everything and say you’re doing so to try to root out terrorism.” While O’Reilly does generally support the PATRIOT Act and aggressively fighting the war on terror, he warned there is too much risk of government abuse and called on the NSA program to be “shut down immediately.”