O’Reilly Tears Into Obama’s Race Speech: President Has ‘No Clue’ How To Combat ‘Gangsta Culture’
VIDEO

O’Reilly Tears Into Obama’s Race Speech: President Has ‘No Clue’ How To Combat ‘Gangsta Culture’ 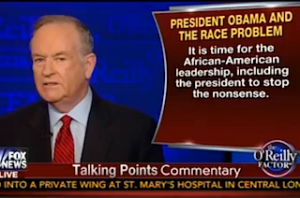 Bill O’Reilly opened his show Monday night by examining President Obama‘s Friday afternoon speech on race and the Trayvon Martin case. O’Reilly began by saying Obama was “correct in addressing the race issue” but then proceeded to hammer the president for failing to address the “real” problems facing the African-American community.

“The sad truth is that from the president on down, our leadership has no clue, no clue at all about how to solve problems within the black community,” O’Reilly said. “And many are frightened to even broach the issue. That’s because race hustlers and the grievance industry have intimidated the so-called ‘conversation,’ turning any valid criticism of African-American culture into charges of racial bias.” He said it’s these attitudes that have forced African-Americans to “fend for themselves in violent neighborhoods.”

Coming back to Trayvon Martin specifically, O’Reilly said there is only evidence that George Zimmerman “profiled” the 17-year-old because he was “dressed in clothing sometimes used by street criminals”–not his skin color. “It was wrong for Zimmerman to confront Martin based on his appearance,” he said. “But the culture that we have in this country does lead to criminal profiling because young black American men are so often involved in crime.”

This led O’Reilly to pinpoint the primary cause of these statistics: “The disintegration of the African-American family.” More than anything else, he chalked up black crime to the fact that “73% of all black babies are born out of wedlock,” a problem that he said Obama and other civil rights leaders refuse to address. He also pointed fingers at the entertainment industry, and particularly “gangsta culture,” for “encouraging irresponsibility” and “glorifying bad behavior.”

O’Reilly outright rejected the notion, put forward by “race hustlers and limousine liberals” that “unfair” incarceration rates for “non-violent” drug offenses contribute to the problem, calling out Jesse Jackson, Al Sharpton and Obama for refusing to condemn drug dealers. Getting more and more heated as he progressed, O’Reilly argued that blacks’ disadvantages “has nothing to do with slavery. It has everything to do with you Hollywood people and you derelict parents.”

In conclusion, O’Reilly said, “it’s now time for the African-American leadership, including President Obama, to stop the nonsense. Walk away from the world of victimization and grievance and lead the way out of this mess.”