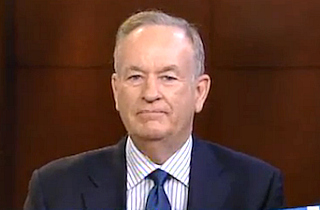 Fox News host Bill O’Reilly appeared on Fox & Friends Monday morning to pitch his book, Killing Jesus, and while he was there he offered a solution to the looming government shutdown, and excoriated lawmakers on both sides of the aisle for “playing a big political game rather than looking out for the country.”

“Here’s what should happen,” O’Reilly said. “Number one, today they should pass three or four weeks, we’ll fund [the government], until we hash this out. So you take that off the table. And then—because this is a mess, and everybody knows it’s a mess, all right? So it should be: if you want to sign up for the exchange, you can. If you don’t, we’re gonna give you a twelve-month grace period. Just like they did with the other select people. Give the folks the option.”

“That takes us into 2014,” O’Reilly continued. “If Congress changes, okay, let’s run it, let’s see how it works. Let’s see how many doctors quit, let’s see what the expenses are really going to be, let’s what how the prescription drug thing shakes down. That’s fair. So why not do that? It would take you twenty minutes.”

RELATED: O’Reilly on 60 Minutes: ‘I Was a Little Thug,’ Now I Get Millions ‘For Being a Big Thug’

“Republicans would agree to it. Harry Reid, I think you’ll have to kidnap. Tie him to a tree up in Idaho somewhere, leave him there for a few weeks. We won’t hurt him, just tie him up so he can’t say anything.”

O’Reilly said this would never happen because both sides were too busy playing to their base. “This is why people can’t stand politics,” he said. “This is so unnecessary, so juvenile. It’s all about ‘macho.'”

He also, beneath the bluster, supported President Barack Obama’s phone call to the new Iranian leadership. “Iran, buch of thugs,” O’Reilly said. “But, look, you gotta talk to ’em. All right, fine, talk to ’em. And then, when they don’t come up with anything, that’s what you say. But you can’t be unreasonable. You have to talk to ’em.”