O’Reilly: Some Children Might Need a ‘Little Whack’ Once and a While
VIDEO

O’Reilly: Some Children Might Need a ‘Little Whack’ Once and a While 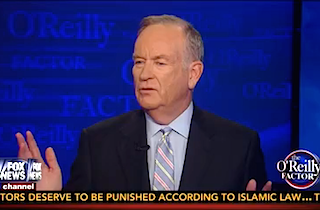 Corporal punishment against children is in the news week after Minnesota Vikings running back Adrian Peterson was indicted for taking a “switch” and “whooping” his kids. So on Wednesday evening, Fox News’ Bill O’Reilly decided to invite fellow host Martha MacCallum on his program discuss the value — if any — in hitting children.

The pair began by looking at surveys that show that a majority of Americans believe it is OK for parents to spank their kids, with the positive percentage reaching 82% when you ask African-Americans (as opposed to 71% for whites). O’Reilly agreed that causing lacerations from something “akin to a whip” constitutes “abuse,” but had different feelings about regular, old spanking.

“By hitting them?” MacCallum responded.

“No, I didn’t say that,” O’Reilly said. “I’m not going to condemn Americans tonight who have spanked their children gently or lightly, I’m not going to do that here on The Factor, I don’t think that’s right. Because each child is different. And if you’re trying to protect your child from something, and you give them a little whack when they’re younger and they remember that whack because it startles them, that might accomplish it.”