O’Reilly Spars With GMA‘s Stephanopoulos On Benghazi: ‘Do You Know Who Told Susan Rice To Mislead Everybody?’
VIDEO

O’Reilly Spars With GMA‘s Stephanopoulos On Benghazi: ‘Do You Know Who Told Susan Rice To Mislead Everybody?’ 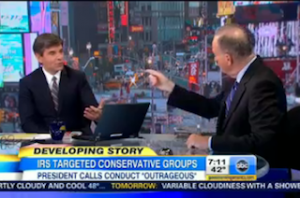 While some members of the right have moved on to the IRS targeting Tea Party groups as the Obama administration scandal du jour, Bill O’Reilly appears to be sticking squarely with Benghazi. Appearing on Good Morning America with George Stephanopoulos this morning, O’Reilly offered some advice to the president. “If I were Barack Obama,” he said, “I would hold a press conference and clear the air.”

Stephanopoulos first wanted O’Reilly to weigh in on the AP records seizure controversy, but the Fox host dismissed it as inconsequential. “I don’t think that’s going to amount to much,” he said. “because it looks like they went through the warrant process and they had authorization to look at these records.” Instead, he quickly pivoted to Benghazi, saying “he’s got exposure on that all day long. Get up there and explain what happened, starting with Ambassador Rice. Who told her to say it? You explain it, Mr. President.”

When Stephanopoulos pushed back, saying Obama has already explained that part of the story, O’Reilly shot back, “no, he hasn’t done it, George, unless you were on vacation.” He asked, “do you know who told Rice to go out and mislead everybody?”

“I don’t think she was told to mislead anybody,” Stephanopoulos responded. “She was given talking points, prepared by the CIA with editing from the State Department.” Echoing Hillary Clinton‘s infamous Benghazi hearing question, he asked, “what difference will that make if the White House has already put out the talking points and said that they were written by the CIA with the input of other agencies?”

O’Reilly maintained that there is a lack of “clarity” from the president on Benghazi that needs to be addressed. “He’s got to start to basically define the stories,” he said. “I believe him on the IRS. I don’t think the AP is going to be that big a deal. They’ll have to say why they wanted the records, but Benghazi, that’s a big story and he’s drowning in it and he better get on top of it, because if not it’ll go on forever.”