O’Reilly Tears Into His And Romney’s Critics: ‘Gifts’ Remark ‘Is A Stone-Cold Fact’
video

O’Reilly Tears Into His And Romney’s Critics: ‘Gifts’ Remark ‘Is A Stone-Cold Fact’ 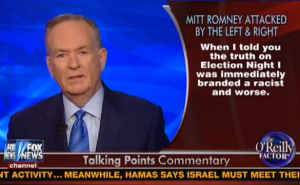 On his show Monday night, Bill O’Reilly took on those criticizing Mitt Romney‘s remark about President Barack Obama winning the election based on the “gifts” he gave to key demographic groups. O’Reilly pointed to his own similar election night comments, and noted that there’s no reason for outrage because it’s simply the truth.

Referring to Romney’s remark, made during a conference call with donors, O’Reilly said that’s basically what he himself said on election night. “It’s a changing country, the demographics are changing,” O’Reilly said that night. “It’s not a traditional America anymore, and there are 50 percent of the voting public who want stuff. They want things. And who is going to give them things? President Obama.”

And he, too, was criticized. But “that’s the truth,” he said, mentioning that 63 percent of Americans making less than $30,000 a year voted for Obama. “It is a stone-cold fact.” Those on the left “don’t want to consider the fact that entitlements buy votes,” O’Reilly said.

But they’re not alone. Romney’s been getting heat from those on the right side of the spectrum as well. O’Reilly particularly pointed to George Will and Newt Gingrich. Romney’s failure is clear, he added: He couldn’t convince majority of Americans that he would look out for them. And what did lower-income Americans vote for? It’s not more debt, Middle East chaos, eight percent unemployment or government regulations. No, O’Reilly said, they “voted for the candidate who they thought was going to directly helm them financially.” Not every Obama voter, he noted, but many.

O’Reilly then switched gears slightly, taking aim at the Washington Post editorial board, which compared O’Reilly’s election night commentary with Romney’s “gifts” remark, and then analyzed it thusly:

“Because it’s a changing country, the demographics are changing,” Mr. O’Reilly said. “It’s not a traditional America anymore.”

In case anyone might be confused about the meaning of “traditional,” he elaborated: “The white establishment is now the minority.”

In other words, the problem was too many voters of color. And Mr. O’Reilly explained why that is a problem.
[…]
We think voters generally make decisions based on a complex assessment of their own interests and what they think is good for the country. Mr. Romney apparently views the people as a series of segmentable, selfish market shares. That is “absolutely wrong,” said Louisiana Gov. Bobby Jindal (R). “We have got to stop dividing American voters.”

It’s encouraging that many Republicans are repudiating the contemptuous, and contemptible, O’Reilly-Romney worldview.

O’Reilly charged that Post with mischaracterizing his comments and putting words in his mouth. He wasn’t lamenting the demographic changes, he said, he was simply reporting them. The “Washington Post editorial staff could not care less about the truth” about the “giant federal nanny,” O’Reilly later added.

“Their worldview is destructive to America.”