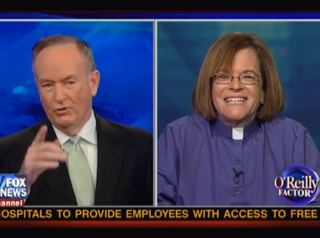 With the Catholic Church up on arms over the proposed mandate to hospitals regarding contraception, Bill O’Reilly spent a second tonight parsing out the problems the Church has with the policy. To discuss the current disagreements between the Obama administration and the Catholic Church, O’Reilly set up a full-clergy panel with Fox News’ Father Jonathan Morris and Executive Director of the Religious Institute Debra Haffner that began in a friendly tone, but ended with Rev. Haffner calling for the Catholic Church to “deal with its own sexuality problems,” which led to O’Reilly calling her “way off base.”

O’Reilly began by explaining the situation– the federal government calling for Catholic-run medical institutions to provide birth control, and making a deal with Haffner that, should he be correct about the mandate forcing Catholics to provide birth control, she would have to return to the Factor while, otherwise, he would go to her church and try to convert people. Father Morris agrees to tag along (“great, you just made it worse” O’Reilly jokingly retorted), adding his serious point: that it was “not an issue about contraception, it’s an issue of religious liberty.” O’Reilly agreed, adding that he didn’t understand what the “beef” was with the government– “respect the religious teaching of their system.”

Rev. Haffner responded that the problem was that the government was only compelling the churches to provide insurance so that their employees could buy birth control– not for the church to provide it themselves. Father Morris jumped in to add that the morning after pill would also be included and calling it an “abortive agent,” adding that he could not see the government doing the same with a Muslim hospital should pork meat be found particularly healthy.

As the segment ended, O’Reilly reiterated that the Church “has a right to make its own rules,” to which Rev. Haffner replied in a heated end to the segment that she thought “the Catholic Church has to deal with its own sexuality problem” anyway, to which O’Reilly retorted that the reverend was “way off topic” with the comment, adding a second threat to give her congregation a visit.