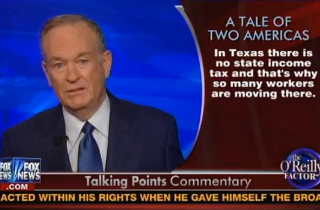 During his opening “Talking Points Memo” monologue tonight, Fox News host Bill O’Reilly told a “Tale of Two Americas: California and Texas,” in which he painted the former as a big-government, spendthrift state; and the latter is a traditional, freedom-loving alternative.

The two states, number one and number two in population, “signify the clash that’s taking place in America right now” between big government and traditional American governance. He explained:

Texas voted for Romney by about 1.3 million votes. California voted for Obama by about 2.3 million votes. Texas is a conservative state; California is dominated by liberal Americans. Both states have more minority voters than white voters. The overriding tradition of Texas is that self-reliance rules — most voters there don’t want government telling them what to do. Therefore, they don’t have a lot of social services. No state income tax in Texas.

He continued on to differentiate the two states’ spending habits:

[In Texas], there is a balanced budget amendment. By contrast California owes an astounding $167 billion. And it’s running an annual deficit of about 9 billion. Money that can never, never be paid back. What is California getting for all of that? High school graduation rate 37 out of 50 states. Per capita income: $44,500. But there is a 10.1% unemployment rate. Crime number one. There are more prisoners in California than any other state. Let’s take a look at Texas. High school graduation rate ranks 44th. Slightly above California. Per capita income about 40,000 bucks per year. But there is relatively low unemployment 6.6%. Convicts and state prisoners ranked number two behind California. So you can see there is not a big difference in the economic and social stats but there is a big difference in mindset. California has many more social welfare programs. Golden State also has many more business regulations. Texas, you could pretty much set up any bigness you want. You can also ride a motorcycle without a helmet, talk on the cell phone in a car and on and on. Texans basically saying hey, government, get out of our lives. Californians, on the other hand, generally embrace big government in just about all areas.

To highlight California’s embrace of a bloated state, O’Reilly pointed to how the City Council of San Francisco is trying to ban goldfish; and then oddly pointed to their recent banning of public nudity. In Texas, however, he pointed out that “if you run around naked and make a wrong move, you might get shot because the state allows its citizens to carry concealed weapons.” In California, “only vicious drug cartel people carry guns,” he said, because the gun laws are much stricter.

He then posed the question to his audience: In which state would you prefer to live? And he began to answer his own question: “These pinheads in [California’s capital] Sacramento think they can just spend money and other people have to pick up the tab. Meantime in Texas, if you hit it big you get to keep much of what you earn. Yes, there are local taxes but the state does not impose an income tax. That’s why so many workers are moving to the Lone Star State.”

O’Reilly then tied California’s taxing and spending to the Obama administration, saying that if the state had its way, there would be a wealth tax, a la “Karl Marx, Mao, Fidel Castro.”

“On paper we can’t do it. But we are living in a very strange time and socialism is close,” he continued. “The state of Vermont has a socialist Senator Bernie Sanders.” And ultimately, he concluded, “I admire the spirit there, I love California. The weather is great, it’s a beautiful place,” but, “as for philosophy, I’m with the Texans.”