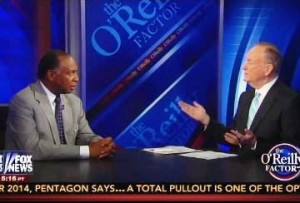 Last night Bill O’Reilly spoke to actor LeVar Burton about how it feels to be driving a car and dealing with cops as a black man in America. O’Reilly continued the race discussion tonight with Reverend Jacques DeGraff, arguing that the reason more young black men are in prison and are approached with more caution by police is because that is a demographic that is committing a significant amount of crime in the United States. He said, “Overwhelmingly, violent crime in this country is generated by young black men.”

RELATED: BET Founder To O’Reilly: Obama Getting A Pass From Blacks, O’Reilly Pushes Back On ‘Institutionalized Racism’

DeGraff said part of it is geography and areas that have higher crime rates than others, so “it’s not in the DNA.” O’Reilly countered by citing a statistic showing 91 percent of all black people murdered in 2011 were killed by other African-Americans. O’Reilly said, “That cuts across every geographical boundary!”

DeGraff admitted it was troubling, and told O’Reilly that the media doesn’t consider a lot of what black Americans care about to be newsworthy. This amazed O’Reilly, who said, “There’s almost a holocaust in Chicago!” O’Reilly also couldn’t believe that the supposedly liberal media would brush all of these things aside. DeGraff argued that many in the media mistakenly believe that President Obama has helped bring America into a post-racial world. O’Reilly found the solution simpler: “They’re afraid of it!”

O’Reilly turned to the Zimmerman case and declared that there’s “no way on earth this trial should be getting this much coverage.” He told DeGraff he’s concerned that “black Americans are going to react negatively” if Zimmerman is acquitted. DeGraff argued that this is merely a small-scale example of the frustration many African-Americans feel about the American legal system. He remarked there is a concern that if Zimmerman is acquitted, it could be seen as “open season for whites to shoot blacks.”