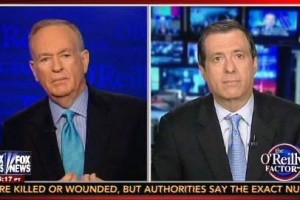 Fox News media critic Howard Kurtz joined Bill O’Reilly on Wednesday night to take on MSNBC’s deafening silence over disgusting anti-Sarah Palin comments made by MSNBC’s Martin Bashir. Kurtz was completely stunned at how MSNBC has refused to say anything and would rather just look the other way, but O’Reilly argued they’ve been in the business of personal vitriol for years.

Kurtz has been keeping the pressure on MSNBC for days, and told O’Reilly that the network should have probably “fired his butt,” or, at the very least, uttered “a single syllable” to denounce Bashir’s comments. O’Reilly doubted they would, because MSNBC has a “long history of vicious, vile smears against conservative Americans.”

When Kurtz argued the culture of cable news rewards “harsh personal attacks,” O’Reilly butted in and said that never happens on Fox, insisting that no one on Fox News is “known for personal attacks,” and even credited CNN for the same (except for Piers Morgan). O’Reilly revealed that Palin doesn’t want to come on his show because she wants to “give a speech” instead of engage, but didn’t begrudge her for the decision.

Kurtz contrasted the way MSNBC handled Bashir with the immediate suspension of Alec Baldwin. He said Bashir’s comments were much worse because unlike Baldwin’s anger getting the better of him on the street, Bashir’s attack on Palin was scripted and approved by the higher-ups at the network.