O’Reilly to Ted Cruz: You Realize Media, Public Blame GOP for This Shutdown 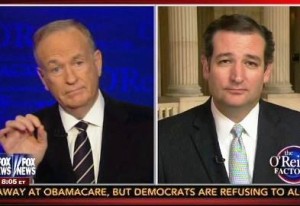 Senator Ted Cruz joined Bill O’Reilly Tuesday night to talk about how both sides can come to a compromise and end a government shutdown. O’Reilly framed this as both sides being too stubborn to give up ground, and suggested a compromise to Cruz that the GOP should embrace, as well as telling him the Republican party needs to do a better job of selling their position on Obamacare to the public.

O’Reilly recapped all the drama thus far, and said a good compromise would be the option of a one-year delay to the mandate. Cruz said he was open to the idea, noting the House embraced that and they’ve compromised “over and over and over again” to fund the government and “mitigate the harm of Obamacare.”

O’Reilly explained to Cruz that even if the Democrats are being more stubborn, that’s not how the media and the American people see it. He suggested Cruz and other Republicans should hold a press conference and “make it easier” and “sell it to the folks” directly so the press “can’t interpret your position.”

Cruz suggested piecemeal continuing resolutions to fund one piece of government at a time, but O’Reilly chuckled and noted, “That’s a clever way of saying we’ll fund everything but Obamacare!” He concluded, “You guys should do some PR here” because “the polls haven’t caught up to you yet.”