O’Reilly: Trump, Bachmann And Palin Are ‘Grenades’ That Could Do ‘A Lot Of Damage’ In The GOP Primary 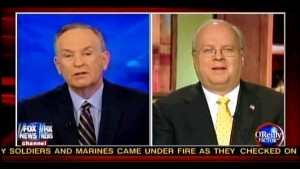 On The Factor this evening, host Bill O’Reilly took a good, hard look at several big Republican names rumored to be considering a run in 2012 – and he didn’t like what he saw.

Karl Rove, George W. Bush‘s former senior adviser, was on hand to rate potential candidates, whom, as he sees it, have three challenges that they must face: 1. Clearly defining their “narrative,” 2. giving firm examples of what they will do to unify the Republican party (you might recall that Rove previously stated that he felt Republicans who were also “birthers” would do well to focus on “real issues” instead), and 3. preparing themselves for their moment in the spotlight.

O’Reilly, rather delightfully referring to himself as the “King of Cable News,” added that just getting known in politics is extremely difficult if you don’t have “the machine” behind you… like, say, George Bush, Jr. had.

He then turned his focus on Donald Trump, Sarah Palin and Michele Bachmann, all of whom he referred to as flamboyant, attention-grabbing “grenades” who could do “great damage” in the primaries should they in fact decide to run. He added that Trump doesn’t have to put forth the “hard job” of being a candidate because he has the luxury, of sorts, of being known for his work on TV. Kove disagreed, saying the work of being candidate requires a little more hand-shaking and baby-kissing than can be done from the cold glow of a television set.