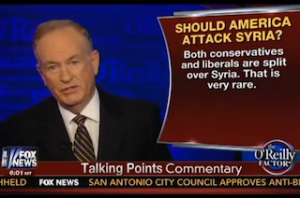 Bill O’Reilly opened his show Thursday night with a rundown of prominent politicians, past and present, who have come down on one side or the other of the Syria debate. Ultimately, O’Reilly said, he’s fed up by members of both parties who oppose military intervention for what he sees as illegitimate reasons.

“Conservatives and liberals are split over this issue, which as you know, is very rare in this country,” O’Reilly began. After running down his extensive list of political and media figures who are for or against the strike, O’Reilly said, “While opinions are all over the place” he “believes a debate is healthy and there are good points on both sides.”

Offering his own opinions on why the U.S. should take action, he expressed how “amazed” he is that Russia and China “continue to arm and support Assad and Iran, knowing both countries are gross human rights violators and condone mass murder. Russia and China should be ashamed. If they would join the USA in condemning terrorist states, the world would be a much safer place.”

“Back in America,” O’Reilly continued, “it distresses me that the left will not support military action designed to protect and strengthen this country ever. And some on the right despise Barack Obama so much, that whatever he does, they oppose it.”

He urged Americans to “put country first,” reject the “fantasy” that Assad did not use chemical weapons and back President Obama’s plan to strike Syria.