O’Reilly Warns Of The Dire Future In Store For Obama’s Second Term: ‘Disaster Could Be Coming’ 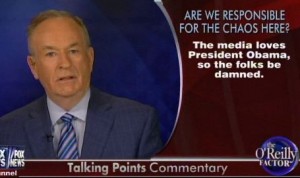 Bill O’Reilly struck a rather apocalyptic tone in his Talking Points Memo tonight, warning viewers of the danger facing the economy and the country if it continues down the same path already half-forged by President Obama. O’Reilly predicted that no matter how many people try to sound the alarm about where the nation is headed, most people are just too content with their lives to listen or care.

RELATED: O’Reilly And Krauthammer Agree: Obama’s Long-Term Goal Is The Destruction Of The Republican Party

O’Reilly opened with a very simple question: are the people to blame for the current state of the government? He cited nations of citizens falling in lockstep behind men like Adolf Hitler and Fidel Castro. O’Reilly clarified that the United States is not approaching a totalitarian state, but dealing with a “very serious economic situation.”

O’Reilly cited a report from the Government Accountability Office concluding that “absent policy changes––the federal government continues to face an unsustainable fiscal path.” He said if there is not a serious attempt to curb spending or entitlements, “the U.S. dollar will collapse,” which, as O’Reilly delicately phrased it, will lead to people’s savings and investments “blow[ing] up before our eyes.”

O’Reilly doubted that anyone in the liberal media would want to talk about the GAO report, because Obama does not want to cut spending or reform entitlements, and so the doting media will ignore the damaging report. O’Reilly compared it to people standing on a beach and refusing to leave after they’ve been warned of an impending tidal wave.

Of course, it is a government of the people, and O’Reilly argued that people not caring enough about the government are allowing the government to get out of control. O’Reilly ended by saying he is simply trying to tell the truth, but not enough people care to listen.

“Many Americans simply will not listen, and even worse, they are not smart enough… to even care. Disaster could be coming.”