O’Reilly Warns Palin: ‘It’s Too Late’ For Republicans To Stop The Negative Attacks 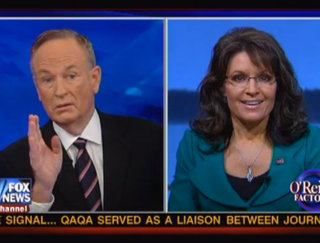 Sarah Palin has been increasingly vocal as the Republican process has gone on in telling Republican primary candidates to refrain from vicious attacks on each other and keep their criticism strictly on the President. On The O’Reilly Factor tonight, the former Vice Presidential candidate told Bill O’Reilly that she wanted to see the candidates stay away from vicious attacks, saying her experiences on a presidential ticket made her understand why voters appear more “disenchanted” now than ever.

“It is imperative that voters do not get lazy in this primary process,” Palin began, citing a comment once by President Obama in which he said that some Americans had become lazy. She implored Americans to “do our own homework,” though her demand seemed hollow to O’Reilly, who reminded Palin that “the majority of voters are ill-informed.” Palin replied that she still believed no matter what the voters think or know that the candidates “have got to focus, they have got to get back to what really matters,” and reiterated that “it’s not negative campaigning to call out a candidate’s record.”

“Governor,” O’Reilly responded, “you’ve got one guy, Gingrich, saying that this guy Romney is a corrupt midget,” he explained, “…then you have the other guy, Romney, saying Gingrich is a corrupt guy with Freddie Mac,” and he went to list other issues. “It’s too late, the genie is out of the bottle.” O’Reilly went on to call it a mistake for Republicans to “get this personal this fast,” one that would help President Obama, and then ask Palin how she handled attacks like the ones Republicans were currently experiencing.

“I hope they, like I do, keep priorities straight,” Palin replied, noting that she thinks of her family and her freedom instead of attacks. O’Reilly asked once again whether it got to her– “you’re a human being, don’t you get tired of this stuff?” Palin replied that she was “more sympathetic when I watch others go through what I went though,” but asserted to O’Reilly that “my skin is thick enough where it’s not going to bother me.”