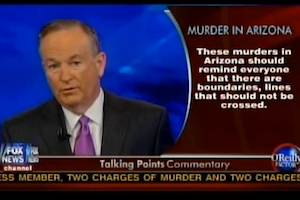 After a weekend of horror and subsequent political confusion (and more than a bit of opportunism), Bill O’Reilly came out swinging in his opening segment tonight, condemning those on the left, particularly Paul Krugman and MSNBC, for what he called the exploitation of a national tragedy.

After a weekend where, ideological divisiveness aside, both sides of the political aisle seemed to agree that maybe the tragic events of this Saturday should be a sign to tone down the political rhetoric, O’Reilly is the first to shatter the relative silence with one of the fieriest commentaries to come from the shootings so far. Decrying the “exploitation of the murders by political zealots,” O’Reilly spared no drop of indignant wrath in his tone against those that attacked Sarah Palin, Michele Bachmann, and others on the right for using violent political metaphors, beginning with the New York Times. “If you disagree with their far left view, you are hateful,” he noted, quoting the paper’s report on the matter, and, later, turning to Krugman’s commentary. Reading a snippet of his work, O’Reilly tersely declared of the “radical left wing Princeton professor,” “Paul Krugman is incapable of telling the truth.”

But even Krugman did not get the brunt of his anger. That honor was left to MSNBC, a network rarely mentioned by name on the Factor, but which today served as the shining example to O’Reilly of everything that is wrong with news coverage today. Noting that Krugman shielded MSNBC from the criticism he gave to Palin and Bachmann, O’Reilly played a clip of Chris Matthews making a violent, but clearly not rabble-rousing, comment about Rush Limbaugh. O’Reilly defended Matthews, but didn’t spare his network:

“Compared to the other people on MSNBC, Matthews is St. Paul. To its disgrace, NBC News allows vicious personal attacks on anyone who doesn’t toe the far-left MSNBC line. The hatred spewed on that cable network is unprecedented in the media.”

O’Reilly then toned himself down somewhat upon leaving the topic of MSNBC to discuss Sarah Palin’s “crosshairs” map and note that even Democrats, namely Senator Joe Manchin, use gun metaphors in politics.

From MSNBC to Sarah Palin, O’Reilly finally landed on the statement from the National Organization for Women, which “equally condemned” the violent rhetoric of those in the media and the tragic events of Saturday. “Somehow NOW does not condemn the Daily Kos or the hateful diatribes of MSNBC,” he argued, bringing the argument full circle.

Overall, the Talking Points Memo is by far one of the strongest and boldest statements to come out of this now three-day ordeal, and it has the potential of making O’Reilly the lightning rod that many occasionally forget he can become. While others implicated in over-the-top rhetoric take some of the blame or adopt a less aggressive tone, O’Reilly has come back more bombastic than ever. He concluded that “what this is all about” is “the failure of the far-left agenda”– the first perfectly exploitable quote in his monologue, as it implies that the horrible deaths of innocents at the hands of what, with little question, was an uncontrollable psychopath is somehow “all about” the failure of any agenda at all. “Hate is hate, no matter where it comes from,” he ended his monologue, which, while fiery, will only stoke the flames of those already accusing him of hate-mongering. For those tired of watching the media walk on eggshells all weekend, it was a welcome return to the cable news passion most equate to semi-normalcy.

The full Talking Points Memo segment via Fox News below: