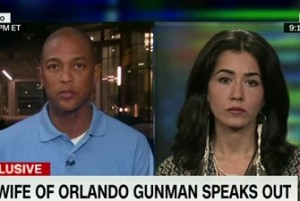 Sitora Yusufiy, ex-wife of now-dead Orlando mass shooter Omar Mateen, has been outspoken in the days since her ex-husband committed the worst mass shooting in American history, and continued to reveal details of her turbulent marriage to CNN’s Don Lemon Tuesday night. In a wide-ranging interview, Yusufiy described the unusual circumstances that led to their brief marriage, and the immediate change that overcame Mateen once they were married.

Yusufiy told Lemon that she endured “…torture. Definitely physical violence,” and recounted a tale of physical and psychological abuse at a supermarket. “We would go in and he would go into a certain aisle to look for something and I would go into a different aisle to look for something else and, all of a sudden, I would hear my name being yelled out,” she said. “He would be calling my name throughout the supermarket and I would — I came to him saying, ‘I’m right here.’ He grabbed my wrist and he dug his fingernails in between my veins and made me surrender and told me to not go far from him ever again.”

The interview also covered questions that have been raised about Mateen’s sexuality in the wake of reports he used gay dating apps and frequented gay nightclubs for years. “I definitely questioned it in my own head when I was with him and wondered if he is (gay) because he would do a lot of things — little things, you know, but that would definitely make any woman question if he was or not,” Yusufiy said.

When pressed, she told Lemon, “I can’t really explain it. It was the way he would behave that normal straight men wouldn’t and he was very — he loved to look at himself. He loved to take pictures of himself which some straight men do, too, but to a certain extent.”

Watch the interview above, via CNN Tonight with Don Lemon.