Our Awful Rape Culture Is Real, But CNN’s Poppy Harlow Was Not ‘Sympathizing’ With Steubenville Rapists 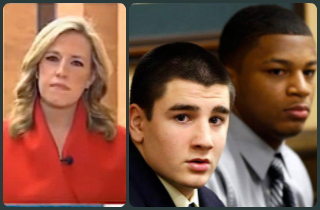 Earlier this week, one of the bigger media controversies was how a few CNN reporters allegedly “sympathized” with the two convicted Steubenville, Ohio, high school rapists. During a live segment on Sunday morning, CNN reporter Poppy Harlow was asked by host Candy Crowley about the emotional state of the courtroom following the guilty verdicts.

“I’ve never experienced anything like it, Candy. It was incredibly emotional, incredibly difficult even for an outsider like me to watch what happened as these two young men that had such promising futures, star football players, very good students, literally watched as they believe their life fell apart,” Harlow responded. She added that rapist Ma’lik Richmond collapsed in his attorney’s arms and sobbed while lamenting how his life is “over.”

Crowley inquired further, asking, “What’s the lasting effect, though, on two young men being found guilty in juvenile court of rape, essentially?” After that, it didn’t take long for the clip to go viral and for backlash to swirl. A petition emerged on Change.org calling upon the network to apologize for “paint[ing] the tears of the convicted Steubenville rapists in a sympathetic light and say how their lives were ruined — while completely ignoring the fact that the rape victim’s life is the one whose life was ruined by these rapists’ actions.”

The petition also called the CNN segment “disgusting,” accusing it of perpetuating “a shameful culture in which young people never understand the concept of consent and in which rape victims are blamed and ostracized.”

The resultant outrage is entirely understandable. We should have no tolerance for people who sympathize with rapists or make excuses for non-consensual behavior. But when you cut through the haze of the controversy and dig a little deeper, it seems as though Poppy Harlow is not the vicious rape-high-fiver many have decided to brand her.

Why? Because if you look through the totality of her reporting on the verdict, Harlow often stressed that this was a serious crime while repeatedly mentioning the devastating emotional impact this whole ordeal has had on the unnamed victim.

During that same controversial segment on Sunday morning, for instance, Harlow explained how the victim’s “life will never be the same again,” and that her mother believes the girl “will persevere” and “get through” these hard times. She read from the mother’s statement, which told the rapists they displayed a “lack of compassion” and a “lack of moral code.”

Later in the day, Harlow told anchor Fredricka Whitfield that the rape was “an incredibly serious crime” before reiterating the details of the sex acts: “Both boys found guilty of raping this 16-year-old girl. One in a car, one in a basement as she lay naked on the floor, and they have been found guilty.”

She explained, again, that the courtroom was “incredibly emotional” during the verdict delivery, noting that the boys’ breaking down was “difficult to watch” before turning to the victim’s family: “The mother of the victim was not in the room when that verdict was handed down, but she did come in a bit later to hear the sentencing. Other family members of the victim sitting there as well.”

Focusing on the emotional impact this rape conviction will have on the two high school football stars could, indeed, seem like “sympathy” — but the emotions of the convicts are part of the story. As Jezebel noted, the better way to phrase Harlow’s responses to such questions would have been to emphasize how Richmond and Mays ruined their own lives by raping an unconscious girl, as opposed to them simply believing they were ruined by the conviction.

But Harlow was just reporting on the emotional state of the courtroom, as asked. A typically dramatic cable news move, yes, but nothing on the level of sympathizing with or excusing the rapists.

During her report in the 2 p.m. hour, Harlow elaborated further on the pain experienced by the victim’s family: “Even though you didn’t see her on camera, you could hear it there in her voice, the pain of a mother whose daughter has been raped. Breaking down at the end there, saying she had pity on the boys.”

“Bottom line,” she continued, “the decisions that were made that night were decisions that have now resulted in a guilty charge for both of these boys in terms of rape, raping this young girl. Now the process of recovery begins for this girl who is back in school, trying her hardest to live a normal life.”

“Rape is such a serious crime that the two of these boys will have to register also, even when they’re out of the juvenile detention facility, they’ll have to register as sex offenders,” Harlow said during the 4 p.m. hour, emphasizing again the grave nature of their crime.

During the 6 p.m. hour, Harlow talked about how the rape victim was not only “degraded over and over,” but she was “done so after the fact again and again online,” because of how the athletes posted pictures and shared them amongst friends. She, once again, described how emotionally difficult it was to sit through the verdict, “but you have to remember the victim, a 16-year-old girl raped, she is at the center of this and they are guilty of raping her.”

It should also be noted that of all the reporters covering Steubenville, the victim’s mother decided to meet with Harlow this week and give her an exclusive second statement. If anyone believes Harlow and her network are guilty of painting the jock rapists as purely “sympathetic” creatures, it doesn’t seem to be the victim’s family. In the same report, Harlow also focused on the death threats the victim has received, giving voice to a local police officer condemning any such behavior.

Additionally, the victim’s own attorney Bob Fitzsimmons talked to CNN this week and seemingly agreed with Harlow, et al, on just how “difficult” it was to see the emotional breakdown of the convicted rapists upon sentencing:

“It was a very emotionally-packed moment that occurred in that courtroom, where watching this young boy suffer once he realized what the punishment, and what had happened at that point.. It was hard to watch anybody suffer, a human being like that. And I think everybody in that courtroom was significantly moved. It was those emotions that moved everybody there. Not that that was right or acceptable or forgiving at that point, but to see the pain that he had caused himself and others.”

Of course, there is a compelling news angle in discussing how these two young men’s lives were ruined by their actions and subsequent conviction. Perhaps CNN could have done more to emphasize that these kids were breaking down over having their own chickens coming home to roost, but talking about that angle does not equate to saying “poor babies didn’t deserve such a harsh sentence” or “I sympathize with them.”

Ultimately, it seems, to say Harlow and crew were sympathizing with and excusing the rapists is unfair. The vitriol aimed at Harlow is misplaced.

To be clear, however, we do have a detestable rape culture. Lord knows there are plenty of twisted people out there who will excuse rape as being the result of the victim’s “temptress” ways, sympathizing with the rapist because the victim “was asking for it.” In fact, despite the guilty verdict, some of Steubenville seems dead-set on protecting their little athletes from that newfangled Internet thing that busts them for raping an unconscious girl, thus taking them away from precious on-field time.

But, come on: Poppy Harlow is most certainly not one of those people.