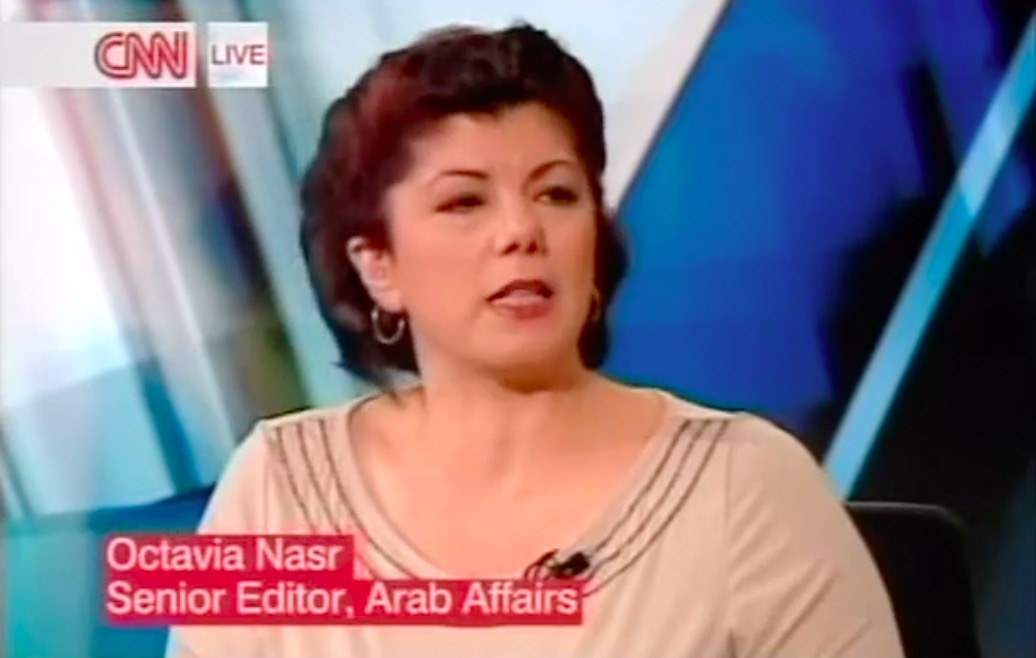 The U.S.-funded Arabic channel Alhurra TV recently brought on Octavia Nasr, a former CNN senior editor who left the network after publicly expressing sympathies for a Hezbollah-tied cleric, as a consultant tasked with helping lead the outlet’s revamp.

Nasr has largely been out of journalism work for the past decade after losing her role as CNN’s editor of Mideast affairs. Her demise at the network she worked at for two decades came after she used her CNN Twitter account to praise Sayyed Mohammad Hussein Fadlallah, a highly controversial Shia cleric who supported Islamist terrorist attacks and was regarded as the spiritual leader for Hezbollah, a militant group based in Lebanon. The U.S. State Department currently labels Hezbollah a foreign terrorist organization.

“Sad to hear of the passing of Sayyed Mohammad Hussein Fadlallah. One of Hezbollah’s giants I respect a lot,” wrote Nasr in July 2010.

A source who spoke to Mediaite about Nasr’s role at the outlet said she acted as a producer, assisting the network with how they covered subjects and what details they decided to omit or include in their reporting.

When reached for comment, Alhurra’s spokesperson described Nasr’s role at the outlet as “a consultant on technical issues,” but claimed she has “completed her contract.”

“MBN is an equal opportunity employer. The company does not discriminate on any basis,” the spokesperson added in response to questions about Nasr’s past employment issues.

Nasr did not respond to Mediaite’s requests for comment.

Alhurra TV is operated by the Middle East Broadcasting Networks (MBN), an arm of the U.S. Agency for Global Media (USAGM). Nasr was personally brought on by long-time Sky News Arabia journalist Nart Bouran, who was appointed as MBN’s senior vice president for news in 2017, per a source with knowledge of the hire.

MBN receives annual funding from the U.S. Congress in excess of $100 million, the vast majority of which goes to Alhurra, while a minority goes to other regional American initiatives like Radio Sawa.

Nasr, who was born in Lebanon and began her media career there, initially defended her tweet lauding Fadlallah’s life in a blog for CNN.com where she insisted it was a reference to personal experiences with the cleric and his stance on women’s issues, rather than an endorsement of his overall views.

“I used the words ‘respect’ and ‘sad’ because to me as a Middle Eastern woman, Fadlallah took a contrarian and pioneering stand among Shia clerics on woman’s rights,” wrote Nasr in the blog post, citing Fadlallah’s opposition to honor killings and other abuses of women.

Due to Fadlallah’s other views — including Holocaust denialism, calls for the destruction of Israel, and praise for suicide bombings and mass shootings targeting Jews — Nasr’s explanation was not well-received in much of the media and she was eventually forced to resign.

Following her ouster from CNN, Nasr launched a journalism advisory group called Bridges Media Consulting. Nasr has never publicly discussed her work for Alhurra and the network did not announce her hiring.

Alhurra, which translates to “The Free One” in Arabic, is based in Springfield, Virginia and was founded under the Bush administration in 2004 — amid the invasions of Iraq and Afghanistan — to correct “negative images” about the U.S. in Middle Eastern and North African news outlets. By the end of the Bush years, the U.S. government had poured $500 million into the massive operation that now broadcasts in 22 Arabic-speaking countries. Alhurra’s mission statement says the network addresses “topics not found in other media outlets,” provide coverage in an “accurate, objective and balanced” manner, and connect “with Arab audiences.”

In 2017, MBN brought on U.S. Ambassador Alberto Fernandez to lead a new, revamped Alhurra TV. Years prior to Fernandez operating the network, he accused Alhurra of employing “radical Shia Islamists who favored their political brethren and discriminated against and intimidated members of other parties” — curious comments given Fernandez’s hiring of Nasr in her first real media stint since praising a radical Shia cleric. (MBN claims Fernandez was repeating opinions held by some Iraqis, rather than stating his own view on Alhurra).

Fernandez is guiding the outlet’s most notable makeover to date, which includes additional personnel, brand new, modernized studios in Virginia and Dubai, and upping their daily broadcasts from six hours to 12. He has vowed to pivot Alhurra’s coverage to combating misinformation and conspiracy theories spread by local news outlets in the Middle East. Ironically, the MBN chief specifically called out Hezbollah while discussing which groups Alhurra is working to expose.

“We will speak out about the nature of these organizations and warn people about what they represent,” he said in 2018, while also referencing the Assad regime in Syria, Shia militias in Iraq, and Houthi rebels in Yemen.

Fernandez went on to tell the Middle East Center for Reporting and Analysis that “Iranian aggression is a huge issue” and claimed that the “reality in the region … [is] all conspiracy, all the time, and that creates an environment of confusion and chaos.”

Last year, MBN’s Nart Bouran purported that the rebranded Alhurra does not exist to serve the interests of the U.S. government, and instead allows voices that “speak for and against” American foreign policy.

Since rebranding, Alhurra has already faced a few hiccups. Iraq’s media watchdog recently barred the channel from broadcasting in the country for three months while citing claims that the outlet was working to “undermine” Baghdad; the accusations were in response to a September Alhurra report on corruption in the Iraqi government. (Alhurra maintains their coverage was “fair, balanced, and professional.”)

UPDATE: This post has been updated to include Alhurra TV’s statement and note that the network describes her contract at the outlet as “completed.”