‘Out Of Control’: Fox Hosts Take On Whistleblower Claim That NSA Wiretapped Obama In 2004 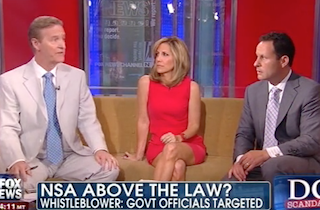 On Friday, Fox & Friends tackled the recent report about Bush-era whistleblower Russell Tice — who came forward with information about warrantless wiretapping — and his claim that the NSA wiretapped President Obama back in 2004. The report demonstrates why all Americans should care about this issue, they asserted, criticizing an intelligence community that appears to be “out of control.”

Tice apparently said the surveillance looked into many including high-ranking military members, judges, diplomats, and lawmakers.

“Here’s the big one,” Tice said. “This was in summer of 2004, one of the papers that I held in my hand was to wiretap a bunch of numbers associated with a 40-something-year-old wannabe senator for Illinois. You wouldn’t happen to know where that guy lives right now would you? It’s a big white house in Washington, D.C. That’s who they went after, and that’s the president of the United States now.”

Alisyn Camerota characterized it as a “dragnet that basically administration officials were investigating anybody that they thought might be, I guess, guilty of something or suspicious or on the other side of them politically.”

Noting that all this likely predates the Bush administration, Steve Doocy said the concern is that “the intel apparatus in this country has so much stuff on all of us, and our leaders as well, they’re just out of control. That’s what this guy kind of suggests.”

“This is why going after journalists like James Rosen is not just a story Fox News cares about,” Camerota argued. “All Americans should care about it. … Journalists can’t be afraid to do their job.”