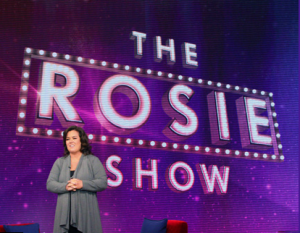 The Oprah Winfrey Network is parting ways with talk show host Rosie O’Donnell. The Rosie Show, which has aired on the network since December, is coming to an end later this month. The finale was announced in a press release earlier today by OWN, where Oprah herself praised O’Donnell for being “an incredible partner, working to deliver the best possible show every single day.”

OWN announced only last week that O’Donnell would be moving the show to New York. In the press release, O’Donnell thanks Oprah for welcoming her “with open arms.”

Read the full press release below:

OWN: OPRAH WINFREY NETWORK ANNOUNCES THE FINALE OF
‘THE ROSIE SHOW’

“I thank Rosie from the bottom of my heart for joining me on this journey. She has been an incredible partner, working to deliver the best possible show every single day,” said Oprah Winfrey. “As I have learned in the last 15 months, a new network launch is always a challenge and ratings grow over time as you continue to gather an audience. I’m grateful to Rosie and the dedicated Rosie Show team for giving it their all.”

“I loved working with Oprah in the amazing city of Chicago,” said Rosie O’Donnell. “I was welcomed with open arms and will never forget the kindness of all I encountered. It was a great year for me – I wish the show was able to attract more viewers – but it did not. So I am headed back to my home in New York – with gratitude. On we go!”