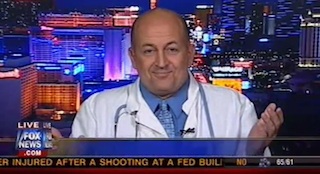 Ah, the Heart Attack Grill. You’ve probably heard of it, either because you’ve been to Las Vegas or because owner Jon Basso frequently appears as a guest on Fox News for reasons that none of us can figure out but probably have something to do with the fact that he sometimes brings girls dressed as sexy nurses. Anyway, it turns out that someone actually had a heart attack at Basso’s restaurant and you know what that means; it’s time for Basso to head to Fox & Friends to speak to all of us about just how serious a heart attack really is.

Of course, it’s not serious enough to not eat at a restaurant that, through its very nature, makes light of heart attacks.

You know what is serious, though? Stopping “busy body groups” who want to take away our right to have a heart attack. Dressed, as always, like a doctor (but without any sexy girls this time…), Basso explained:

“Look, the restaurant, and I would like to call it the clinic, the Heart Attack Rrill is not just a place to get a Bypass Burger or Flat Liner Fries or Butter Fat Shake. What it’s all about is a place where you can live the way our founding fathers intended us to live. And that is by our own accord, without encroachment from any busy body groups or governmental agencies that are trying to tell us what to do, trying to dictate to us not just what we think and how we act, but the most insidious dictation of all and that is what we eat.”

He’s right. We need to live the way our founding fathers did! With an average life span of 35 years!

Anyway, after the interview, Fox News’ Juliet Huddy summed up the entire point saying, “If you don’t like it, just don’t go there” and that she’d love to go herself.

You know, we’re wasting our time always having Basso come to Fox News. Clearly, the extremely fit Fox News personalities should go there. Why don’t we ever see that? It would make for much better television.

Besides, there’d be more sexy nurses.