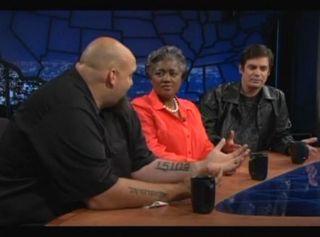 It became apparent the moment guests started speculating about the Bachmanns’ sex life that last week’s Real Time would be hard to top– and this week’s edition was certainly more substantive than the last, with an extensive debate on how Congress should balance the budget and the elusiveness of compromise. But it had its tense moments, too, as one panelist, a Pennsylvania mayor, (jokingly?) offered to “take it outside” after being sarcastically told to be proud of his town’s poverty.

Perhaps the reason this week’s panel was much more in control than the last was due to the general lack of agreement among the panelists. Beyond the fact that something should be done to balance the nation’s budget, Bill Maher and his three guests didn’t agree on much, though far and away the furthest from agreeing with anyone was Reason.com‘s Nick Gillespie, who at some point even argued defaulting on the American debt wouldn’t be all that bad, or at least argued that the last time Republicans refused to compromise with a Democratic President– the 1990s government shutdown– that “led to negotiations that led to a balanced budget.” His obstinate opposition to raising taxes also got him an earful from Maher and the other two panelists: ABC News’ Donna Brazile and Braddock, PA Mayor John Fetterman.

Fetterman delivered one of the funnier images of the night, mocking Rep. Eric Cantor as thinking of himself as “King Leonidas and the freshman are the 200 Spartans” and comparing the debt debate to the Terri Schiavo controversy, though not entirely elaborating on that analogy. Brazile, meanwhile, came up with an analogy of her own to explain what defaulting on the national debt would be like: “it’s like we both went out to eat, and we had a delicious meal– of course it was creole, we’re not going to get into why it was creole– and at the dessert, bread pudding, you walk out.” Maher jumped on the analogy: “it’s paying the bills for money that has already been spent– this is a meal you already ordered.” Gillespie dismissed this as “junkie logic,” that would lead to no one kicking the spending habit, and while he stopped short of expressing acceptance of a debt default, he got close enough to irritate the panel into further argument about what message the world would receive from such a default (Maher’s answer? “that we’re deadbeats who don’t pay our bills”).

And then there was the most legitimately contentious moment of the debate, prompted by an aside by Mayor Fetterman– “I am the mayor of the poorest town in Pennsylvania.” “Well, you must be very proud,” Gillespie muttered audibly, to which Fetterman replied, “We’ll take it outside.” It was delivered as a joke, of course, but in a way that indicated that the offer wasn’t 100% off the table. It didn’t take long for Maher to step in, as Gillespie reacquired a pen he had been unconsciously brandishing at Maher earlier, just in case.

The panel discussion via HBO below: