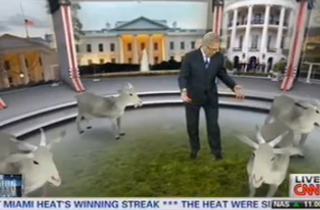 With that in mind, here’s a hot tip for Stewart: This week has seen not one, but two hilariously awkward uses of the CNN hologram featuring reporter Tom Foreman. Six days ago, Foreman unwittingly posed with a holographic nuclear missile in his groin area; and this afternoon, Foreman frolicked amongst a field of holographic goats, a giant stack of 3D regulatory papers, and a giant penny. 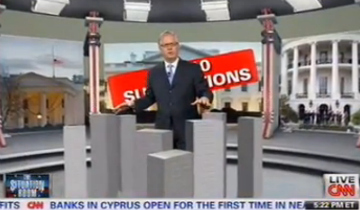 “Let me reach into my change pocket and pull this out,” Foreman joked like a goofy uncle as an enormous holographic one-cent coin appeared before him. “Get rid of the penny,” he said of this second suggestion. 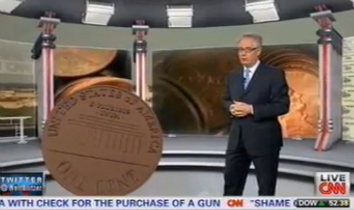 Eventually, he said, “some of the ideas that may seem really silly and odd can actually work.” For example: using goats for landscaping. Naturally this means we need… GOAT HOLOGRAMS.

Standing amongst a bunch of cyber-goats, Foreman admitted he felt “silly” but explained that President Woodrow Wilson purchased a flock of sheep to graze the White House lawn as opposed to paying for manual landscaping. (On a serious note, this is actually an effective cost-cutting measure. Pasadena, Calif., and plenty of other municipalities have used goats to clean up lawns and rid areas of the invasive weed kudzu.)

Watch the holographic awesomeness below, via CNN: