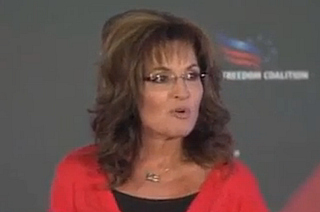 Sarah Palin addressed Ralph Reed’s Faith and Freedom Coalition’s Road to Majority conference Saturday morning, skewering Obama voters, the NSA, and Washington culture in general, and throwing a good-natured elbow to her “friends” at Saturday Night Live while she was at it.

“It seems so Orwellian around here,” Palin said. “Before 1984, terms like ‘leading from behind’ meant following. The other day the White House testified before Congress, bragging that they used the ‘least untruthful statement.’ Where I come from that’s called a lie.”

“Yes, officials lied, and government spied,” Palin rhymed. “In Benghazi, government lied, and Americans died. These scandals are coming at us so fast and furious.”

“It reminds me of a comedy bit from my really, really good friends at Saturday Night Live,” Palin said. “They should think of me as a friend, for a while I was supplying more job security for the Tina Feys of the world and doing more for those employment numbers than Obama’s ever done.”

Palin proceeded to do her best Amy Poehler impression.

“Our government spied on every single one of your phone calls,” she said, “but it couldn’t find two pot-smoking deadbeat Bostonians with a hotline to terrorist central in Chechnya. Really? And it’s built apparatus to sneak into all of the good guys’ communications, but oopsy-daisy! It missed the Fort Hood mass-murder of our own troops, despite this Islamic terrorist declaring his ideology in numerous army counseling sessions and on his own business cards. But no red flags there. Really?”

Palin also asked Reed to sic her on any protestors outside the conference. “Easy to spot them in the parking lot, in their itty-bitty purple Volts,” Palin said. “What gives them away is that Reelect Obama bumper sticker. That bumper sticker might as well say, ‘Yeah, I’m still dense.'”

Watch the segment below, via CNN. Full speech will be posted when it becomes available.