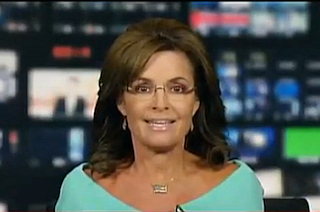 “We’re building a very strong case against that trust of today’s federal government,” Sarah Palin told Fox host Eric Bolling on Saturday morning, in one of her first appearances since being rehired by the cable network. In a wide-ranging but softball interview, Bolling plied Palin on the IRS scandal, domestic drone use, and NSA surveillance, with the refrain, “Can we trust the federal government?”

“Is a bear Catholic?” Palin answered. “Does a pope live in the woods? No, I do not trust our federal government. That is the seventeen-trillion dollar question.”

Palin, like her ideological mate Ted Cruz, extrapolated from the IRS scandal an argument against the organization’s existence.

“This would give us reason to finally head towards simplification of a tax code and adopt a flat tax and you know, that way we could abolish the bureaucracy that is so burdensome and so expensive and really engaging in some ridiculous antics today in the IRS,” Palin said. “It would allow sledgehammering of crony capitalism, also, and some corruption within, the tax cheats and that whole scenario. I think this would give us great reason to make more sense of the coffers that are being filled by the American public’s fruit of their labors.”

The IRS kerfuffle now includes news of $70 million in employee bonuses. The agency has said that its hands are tied due to a collective bargaining agreement with the employee union.

“That’s part of the problem,” Bolling said. “It’s a federal government program, we’re paying their salaries, yet they’re a union! Does this not drive you crazy?”

“Only in an Orwellian government would a collective bad deed by so generously rewarded,” Palin said. “You can anticipate that the Obama administration will not even push back on what this union is demanding for its employees. The Obama administration will kowtow to the friends who are union thugs—the leadership of so many of these unions are thugs—and they will not push back. Unfortunately because it gives a bad name to the brothers and sisters within the union who just want to produce well for the American public and do their job. It’s the leadership that is engaged in the thuggery that unfortunately Obama will not push back against.”

“I think what Mueller is telling us is ‘Hey, America, on U.S. soil, we’re going to shoot you down just a little bit,’ because he’s talking about just this minimal impact of drones on U.S. soil,” Palin said.

“What this allows us to understand, though, is that Rand Paul was right when the senator engaged in the filibuster and what he was asking for those couple of months ago,” Palin continued. “He asking for the unanswered questions about domestic use of drones and the impact on the American public—what were they and what was going on and was it actually happening. He was chided and mocked and ridiculed by the Obama administration and by some in the senate for engaging in such a thing. Rand Paul was right. He was asking the questions, and now finally we are getting an answer that yes, drones are used on the American soil.”

Bolling moved on to the NSA’s surveillance program, revealed by leaker Edward Snowden. “It feels to me like we’re either in Iran or Communist China,” Bolling said of the Bush-era programs.

“Snowden is not the problem,” Palin said. “The problem is government violating our Fourth Amendment right and taking away our privacy.”

Palin went on to compare the NSA surveillance program to the incident during her 2008 campaign in which her emails were accessed by a hacker.

“Government in this case is doing the same thing that that punk hacker kid did during the VP campaign,” Palin said. “It’s not a safe, ethical, moral nor a legal measure taken by our government.”

Watch the interview here, via Fox: