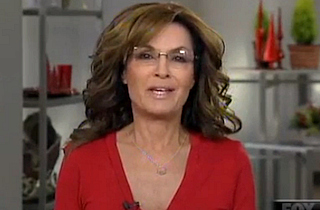 Former Alaska governor Sarah Palin appeared on Fox News Sunday and addressed Martin Bashir‘s comments about her, slavery, and defecation, accusing MSNBC of being guilty of “executive hypocrisy” for not punishing Bashir, and telling him that the next time he wants to apologize, he should do so to her husband Todd or her children.

“It depends on the target of the vile rants, it doesn’t depend on what the rant itself actually is,” Palin said of why Alec Baldwin was suspended over a homophobic slur, but not Bashir for his remarks. (Bashir apologized last week.) “Conservative women are a target.”

“As for the networks condoning those type of statements—because there’s been no punishment of a fella who said these words—that’s hypocrisy, that’s a given, though, when a conservative woman says something that they take offense, they usually just kind of poo-poo it, laugh it off as no big deal,” Palin said. “As for personally taking shots—everybody in life takes shots. You have a decision in life when you take a shot: are you going to become bitter or better? In a case like this: I don’t have to accept his words, his vile, evil comments, they don’t have to affect me. I move on and charge forth.”

“However, if Mr. Bashir, or anybody else in this media elite bubble that they put themselves in were to attack someone who is defenseless, like a vulnerable child, who does not have that podium, that microphone that god has blessed me to be able to express my opinion, if they don’t have that type of platform to defend themselves—well, if you want to see a Mama Grizzly get riled up and slap that person down, then you come after that vulnerable child,” Palin said. “In this case, he didn’t come after a vulnerable child. I can defend myself.”