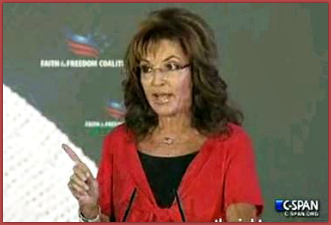 “DC is one hot mess,” Sarah Palin told the attendees of Ralph Reed’s Faith and Freedom Coalition conference on Saturday morning, trashing Obama over a variety of scandals, promoting libertarians over the GOP establishment, and encouraging tea party movements.

“Something more is going on than your garden-variety government corruption, or even illegality,” Palin said. “As the left would say, this is shaping up to be a teachable moment. What’s going on says something fundamental about our relationship to our government.”

“The scandals infecting this city, they are a symptom of a bigger disease, and it doesn’t matter if it’s a Republican or a Democrat sitting atop a bloated boot on your neck, out of control government, everybody gets infected, no party is immune,” Palin said. “That’s why, I tell you, I’m listening to those independents, those libertarians, who are saying, it is both sides of the aisle, the leadership, the good ol’ boys in the party on both sides of the aisle, they perpetuate the problem.”

“You know what I wish the Congress would do?” She asked. “Just for a week, perhaps, put themselves on Cruz control—Ted Cruz control. I think we’d see some solutions.”

“Don’t discredit and dismiss everyday average hard-working Americans,” she continued, “those who are part of that grassroot tea party movement who want to effect the positive change, because too often, leaders, you are not doing it.”

Palin also took on the “pandering, rewarding the rule breakers, still-no-border security, special interest written amnesty bill,” especially ribbing Jeb Bush for his fertility comment yesterday. “I think it’s kind of touchy territory to want to debate this over one race’s fertility over another, and I say that as someone who’s kinda fertile herself.”

Obama didn’t evade Palin’s lashing, either. “Where is our commander in chief?” Palin asked. “We’re talking now more new interventions? I say, until we know what we’re doing, until we have a commander in chief who knows what he’s doing—well, chief, in these radical Islamic countries, aren’t even respecting basic human rights, when both sides are slaughtering each other as they scream over an arbitrary red line ‘Allah ak-bar’—I say, let Allah sort it out.”

Watch the speech here, via CSPAN:

Video via The Right Scoop