Sarah Palin On Sandusky: ‘Hang Him From The Highest Tree And I’ll Bring The Rope’
video

Sarah Palin On Sandusky: ‘Hang Him From The Highest Tree And I’ll Bring The Rope’ 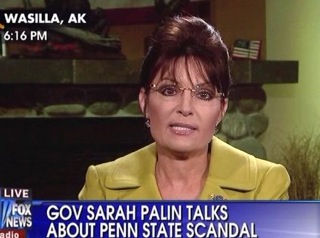 After a brief hiatus after announcing she would not seek the Republican nomination for the presidency in 2012, Sarah Palin returned to On the Record to give her take on the 2012 elections. The conversation got significantly less political when Greta Van Susteren asked the former governor for comment on Rick Santorum‘s decision to call for Penn State’s football team to abstain from playing football temporarily in the aftermath of the Jerry Sandusky, a problem towards which Palin had a solution: “hang [Sandusky] from the highest tree.”

While Palin didn’t really respond to whether it was a good idea for Santorum to comment on the matter or not (Santorum is a Penn State alum himself), she did disagree with his premise. “It’s not the players’ fault they have a perverted former assistant coach.” Palin argued she would “like to see the players not suffer any more than they have suffered already,” but as for Sandusky? “Hang him from the highest tree; I’ll bring the rope.” She went on to call his alleged behavior “pathetic, it’s horrible, it’s atrocious,” but ultimately, “today’s young players have been innocent in all of this.”

Van Susteren then asked her to clarify, suspecting the beginnings of a media firestorm on those comments, whether Palin was saying so with the implicit understanding she meant that in the event that Sandusky was, indeed, guilty. Palin repeated: “Hang him from the highest tree and I’ll bring the rope if he is guilty of what has been alleged.”