Palin Slams Obama Over Libya, And TIME For Naming Him Person Of The Year 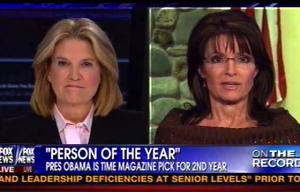 On Greta Van Susteren‘s show tonight, Sarah Palin reacted to the independent report finding the State Department at fault for “systematic failures” over the attacks on the U.S. consulate in Benghazi, as well as Time‘s decision to award President Obama its “Person of the Year” honor. Palin said of the latter that she both finds it shocking that Obama would be honored for trying to create “a more perfect union,” while dismissing the whole honor as irrelevant anyway.

Palin claimed its odd that the Benghazi report found that mistakes were made but no clear idea of who actually made them. She did, however, credit Fox News for being the one news outlet that’s been adequately covering the story. Van Susteren noted how the rest of the media was not was committed to covering the story as much as Fox did, and possibly as a result, Fox News was not welcomed into briefings on the investigations into the attacks.

Palin said it’s been clear that the Obama administration has been trying to deceive the American people throughout the election season while Van Susteren found it odd that Hillary Clinton would now say that the administration was keeping an eye on al-Qaeda from the very beginning, considering how she and other administration officials were quick to point fingers at the anti-Islamic film Innocence of Muslims.

Van Susteren then switched gears to ask Palin her thoughts on Obama being named Time‘s person of the year. Palin was amazed to think that Time would think Obama is striving for “a more perfect union” when, she argued, he has frequently “not… [been] following the Constitution.” However, Palin also outright dismissed the relevancy of Time‘s honors, joking that her own inclusion on the Time 100 in years past says it all.