Palin To Hannity: ‘So Many Untruths Spewed By Obama … Romney Just Didn’t Have Time To Answer Them All’
video

Palin To Hannity: ‘So Many Untruths Spewed By Obama … Romney Just Didn’t Have Time To Answer Them All’ 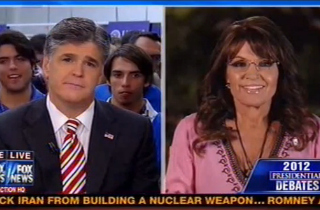 “There were so many untruths spewed by Obama tonight,” she said. “Unfortunately Romney just didn’t have time to answer them all.”

She went on to hit the president for his mannerisms, which she believes “manifested his lies catching up with him, and thus the desperation really came across in this debate on behalf of Obama.”

Some of the “untruths” Palin cited to host Sean Hannity were the president’s suggestion that “we are more energy secure today than we’ve ever been,” his “claim” that “we have better relationships with all of those on an international stage, including Israel, than ever,” and her belief that he claimed “sequestration was Congress’s fault and that it won’t happen.”

Hannity agreed with her and slammed the president’s attitude as “arrogant.”

“One thing I wish Romney could have hammered home was to me was a lack of credibility as Commander-in-Chief having respect for our military troops,” she said, “when he would claim that he has troops fighting and be willing to die on quote, his behalf, unquote and yet he is willing to throw them under the bus and withhold their paychecks to get his way with congress to increase the nation’s debt.”