Palin Urges GOP to Be Like Ted Cruz, ‘Stand United’ Against Obamacare 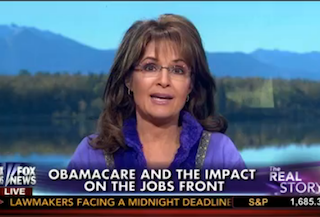 Gretchen Carlson not only had Fox & Friends regular Donald Trump in studio on her debut afternoon show The Real Story on Fox, she also booked an interview with Sarah Palin, who appeared live via satellite from her private airplane hangar in Alaska. Like Trump, Palin shared her advice for how Republicans should handle the last minute negotiations to avert a government shutdown.

For Palin, it all came down to an analogy about “flushing dogs.” She explained:

“It’s a good term when you apply it to someone like Senator Ted Cruz and Mike Lee, others who are literally trying to flush out those other politicians who are in hiding. They’re kind of in the woods, hiding behind symbolic votes that don’t mean anything. Instead of standing up and fighting for Americans. In this case we’re talking about the Americans who understand the soaring costs of Obama are and the huge government intervention that will be a result of Obamacare in our businesses and our individual lives, and that will suffocate enterprise and industry. So flushing dogs are those who get out there and make these politicians in this case come out from hiding and stand tall and fight for what’s right.”

At the same time, given that all GOP lawmakers aren’t acting like “flushing dogs” at this point, Palin said that for the Republican Party, “United we stand and divided we will fall.” She specified, “We will fall under Obamacare.” Given the fact that the health care law will “decimate” the middle class, as Palin put it, “it’s unfortunate that the GOP isn’t standing together.”

“This is the time to be united,” Palin continued, offering a warning of sorts for next year’s elections. “And a lot of this also, they need to keep in mind, has to do with the midterm elections coming up in 2014. I think if they would stand united it would send a message to, say, the red state Democrats who are up for re-election and are going to have to face constituents who understand the dangers of Obamacare.”