Pamela Geller And Hannity Muslim Guest Erupt In Shouting Match: ‘How Dare You Accuse Me Of Murder!’
video

Pamela Geller And Hannity Muslim Guest Erupt In Shouting Match: ‘How Dare You Accuse Me Of Murder!’ 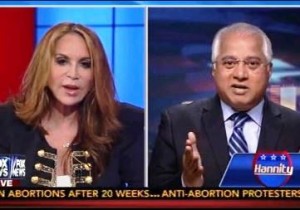 Sean Hannity tonight brought attention to Egyptians taking to the streets to protest the regime of President Mohammed Morsi. Pamela Geller and Mike Ghouse got into an angry, heated back-and-forth when Geller confronted Ghouse for claiming her New York subway anti-jihad ads were responsible for someone losing their life in the subway. She shouted at him, “How dare you accuse me of murder!”

After slamming President Obama for helping the Egyptian government, Hannity touted how he said from the very beginning that instituting a president with ties to the Muslim Brotherhood would turn out badly for Egypt. Ghouse said that it’s wrong for the U.S. to be aiding Egypt, and agreed that Obama should not be offering his support for the Morsi regime. He called Morsi a “bully,” Hannity called him an “Islamic extremist” (though Ghouse disputed the necessity of including the “Islamic” part).

Geller noted how Morsi fully believes that Obama will ultimately not side with the protestors, saying the American president is consistently “on the side of jihadic Islamic supremacist regimes” from Libya to Egypt. Geller also explained that she was banned from England for her outspokenness on these issues. She then confronted Ghouse about accusing her and her anti-jihad ads of causing the death of someone in the subway system, demanding an apology from him.

Ghouse refused to apologize, noting that last year he warned of the “dangers of those ads,” but Geller insisted that the ads said nothing about Islam, just about jihad and “savages.” Ghouse shot back, “You owe an apology to the people who you are hurting and saying bad things about it.” Geller countered, “You’re saying the truth hurts people, don’t you see how irrational your logic is?” She shouted, “How dare you accuse me of murder!”