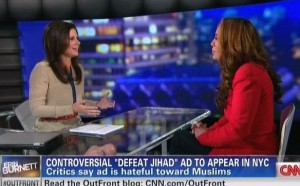 Pamela Geller has been running a controversial ad in New York subway stations that compares Muslim extremists to “savages.” She won a court order to keep the ads up after complaints that it was too offensive. Geller sat down with Erin Burnett on CNN today to defend the ads. Burnett argued that just because someone has a right to something does not mean they should say it, and Geller told Burnett that her opinion is “emboldening Islamic terrorism and emboldening extremism.”

RELATED: NYT: We Printed Anti-Catholic Ad And Not Anti-Muslim One To Protect The Troops

Geller said she wanted to put up the ad to rebut the anti-Israel ads she sees in the subway all the time. She argued that the First Amendment gives her the right to put up something that people find offensive. She said, “I’m running them because I can.” Burnett told Geller her ad sounds like a “narrative of hate.” Geller rebutted her by pointing to terrorist attacks and referring to them as “savagery.”

Burnett asked Geller why she would want to denigrate an entire faith with her ad. Geller countered that she did not, but did dispute the idea that there is anything in the Qu’ran about peace. Geller also pointed out that people are not being killed all over the world for Christianity and Judaism. When Burnett tried to call Geller out for using the word “savages,” Geller said that Burnett was misinterpreting what she said.

Burnett told Geller that just because she has the right to run with the ad does not mean that she should. Geller argued that her viewpoint is not controversial, and compared attempt to take down her ad to Sharia law. Burnett asked Geller how she would react if someone was killed as a result of her ad. Geller ardently insisted that she is not responsible for the violent actions of others, telling Burnett that her position is the more dangerous one.

“I think your position is emboldening Islamic terrorism and emboldening extremism because you’re sanctioning it.”

Burnett closed the interview by highlighting statements from the Anti-Defamation League that condemn Geller’s ad. Geller brushed aside the criticism, saying that no one who loves the Jewish community actually “takes them seriously.”