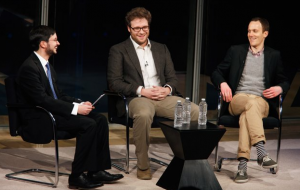 Who: Seth Rogen, Will Reiser, moderated by Dave Itzkoff
What: New York Times Arts & Leisure Weekend
Where: The Times Center
When: January 8, 2012
Thumbs: Up

Seth Rogen may have been the bigger name of the two men interviewed on the stage, but Will Reiser was the one with the story to tell. Moderator Dave Itzkoff made the right call by beginning the discussion about last year’s “cancer comedy” 50/50 with Reiser, who documents parts of his own cancer experience in the screenplay he drafted for the film. Reiser insisted, however, that while themes, situations, and some relationships were lifted from real life for his script, most of the film’s events are not part of his recovery story.

Reiser said that though he felt “removed” from the lead character Joseph Gordon-Levitt played in the film, the emotions therein were real. He felt the same way about the overall thrust of the film- the role friendship and comedy played in helping him through his illness. Rogen, who pretty much revived his real life role as the supportive friend in the film, gladly played second fiddle at this panel. During Reiser’s ordeal, he and Rogen recognized that people weren’t treating Reiser normally, and they wanted to capture that strangeness. Because it hit so close to home, Reiser acknowledged that it took him a year and a half after his recovery to even begin writing. It came partly thanks to the insistence of Rogen and others that he had a great story to tell.

They set out to make a low-budget film because they didn’t want the input (read: interference) of studio executives who wouldn’t believe that the project had legs. Originally, Reiser called the project “How I Learned Nothing From Cancer,” but after his friends gave it a read, they assured him that he had grown a great deal from the experience. Reiser stated that it’s “gratifying” to know that other cancer survivors have found the movie to be meaningful and true to their experiences, but Reiser also shared that that was not his intention. He just wanted to make a funny movie about cancer.

What They Said
“We joked around about it and talked about what kind of movie we could write about it.”
– Seth Rogen remembers how he and Reiser dealt with Reiser’s cancer diagnosis

“I think you find things you didn’t know were there unless you let actors try things.”
– Will Reiser explains why it’s so important to allow for improvisation on movie sets

“I said ‘We’re f—-ed. We need an actor. You’re an actor. What do you say?'”
– Seth Rogen’s account of how he convinced Joseph Gordon-Levitt to sign on after their original lead, James McAvoy, was forced to back out at the last minute

“I honestly think the things that give people the most pause are the most exciting for us.”
– Seth Rogen believes that comedy comes from tragedy. Or something.

“Sometimes the truth is more absurd than fiction.”
– Will Reiser actually had to cut parts from his movie based on true events that some felt were too far-fetched to be perceived as possible

PANEL RULES!
Some audience behavior seems to repeat itself panel after panel. We’ll be updating a running list of “PANEL RULES!” that will help ensure that you are not the dweeb of the Panel Nerds.
Panel Nerds don’t like…Truthseekers
With any screenplay that’s based on reality, people will wonder what’s true and what’s not true. For artisans, it hardly matters. For the audience, though, it’s almost essential to know which is which. So it came as no surprise that some audience members asked if certain scenes were based on real events that took place. Reiser seemed to disappoint them when he revealed that for the most part they were all made up. Why this matters so much to people we cannot explain.