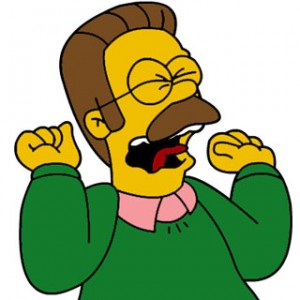 It was once a big deal for prime time viewers to hear the word ‘shit’ on network television. It seems those times are no more: the Parents Television Council has released a report that finds that the past five years have seen a 69.3% increase in prime time profanity. The f-word, for instance, showed up 111 times during “family hour” in the fall 2010 season, while that same word only appeared 10 times in 2005. Damn.

The report, titled “A Habitat for Profanity: Broadcast TV’s Sharp Increase in Foul Language,” reveals that both the quantity and, er, quality of swearing has increased. “Profanity is far more frequent and the profanity itself is far harsher than just five years ago,” said PTC President Tim Winter. “Even worse, the most egregious language is being aired during the time slots when children are most likely to be in the audience.”

Nellie Andreeva of Deadline culled from the report these interesting statistics:

The Fox broadcast network showed the greatest per hour increase in use of profanity from 2005 to 2010 with a 269% increase across all prime-time hours.

All of this prompted Winter to dramatically proclaim, “The public airwaves should offer a banquet for all. But increasingly, the broadcast networks are telling American families to swallow whatever they’re fed or starve.”