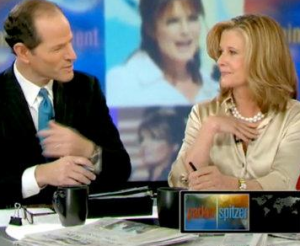 After a New York Post column last week that claimed a fed up Kathleen Parker “stormed off” the set of CNN’s ratings-challenged Parker Spitzer, Parker tells The New York Times‘ Brian Stelter there has indeed been “some editorial and political tension.”

In interviews with Stelter, Parker and co-host Eliot Spitzer say they’re committed to the show and believe it will succeed, despite trailing both MSNBC’s Countdown and Fox’s O’Reilly Factor by wide–and wider–margins. Parker specifically denied any intention of leaving the show, saying she had just signed a two-year lease on an apartment in New York.

About that rumored dustup that supposedly sent Parker storming off the set? Parker gave the Times an elegant non-denial denial:

Asked about that claim, Ms. Parker said, “I don’t storm. I saunter.”

She acknowledged that there was some “editorial and political tension,” but cast it as a normal part of television production. “That’s how human beings are made,” she added.

Mr. Spitzer put it this way: “I’ve seen tension in my life — conflict, tension, acrimony — and I haven’t seen anything here that comes close to what I’ve seen.”

The co-hosts, while dismissing accusations of off-camera conflict, say they will be bringing more energy to their on-camera debates:

In the future, Ms. Parker said she expected to have more airtime to talk about the social and cultural issues that she covers in her columns. “We’re definitely going to be mixing it up more,” she said.

In a separate interview, Mr. Spitzer said, “We’ll talk about movies sometimes, sports, we’ll have everything under the sun, but we are clearly a political show.”

To hear him tell it, “Parker Spitzer” is like a courtroom, a place where “smart people can discuss tough issues; go back and forth and challenge each other; probe each other for weaknesses in the argument; and force resolution if possible.”