Part 2 – Before She Was The Rachel Maddow: The Best Of The Maddow-Tucker Carlson Debates
video

Part 2 – Before She Was The Rachel Maddow: The Best Of The Maddow-Tucker Carlson Debates 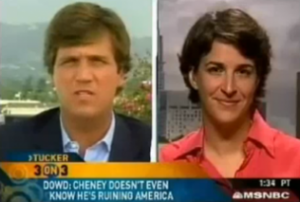 RELATED: Part 1 – Before She Was The Rachel Maddow: The Best Of The Maddow-Tucker Carlson Debates

In this installment, Carlson squares off with Maddow on not just the Democrats’ chances to take back the House of Representatives in 2006 (which they did), but the slowly-evolving presidential race to succeed George W. Bush. Carlson tells Maddow in the clip that he can’t believe the Democrats are trying to recruit Illinois Senator Barack Obama, a U.S. senator for only two years, to run for the highest office in the land. Maddow argues that his short tenure in Congress might actually be a benefit to his potential campaign, and the longer he serves in the Senate, “the less electable he becomes.” Carlson runs down the list of potential Democratic candidates, including Chris Dodd and Russ Feingold, dismissing it as a “lame line-up” and the only reason Obama is being touted against Hillary Clinton is that the party thinks she’s weak.

Maddow predicts that Clinton will not end up being the Democratic nominee, which Carlson immediately laughs at.