Passionate Mother of Slain Child Pleads for New Gun Laws: ‘This Is Genocide in America’
video

Passionate Mother of Slain Child Pleads for New Gun Laws: ‘This Is Genocide in America’ 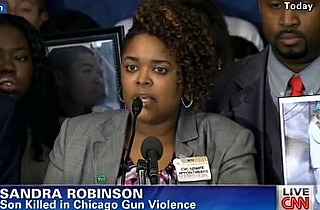 On Wednesday, gun control advocate and mother of a slain Chicago teen, addressed the press along with a group of other grieving victims of gun violence. Sandra Robinson delivered a powerful address calling on lawmakers in Washington D.C. to act in order to prevent further gun-related deaths. “This is genocide in America,” she said during her impassioned address.

“To our Congress, to our Senate, to our president, vice president, even to the wives of our politicians,” Robinson began. “You are mothers. We would hate for you all to have to stand in our shoes and feel what we feel.”

“My son Dino was 18-years-old, standing on his grandmother’s porch at five o’clock in the evening,” Robinson beseeched. “He did not deserve to be shot down like an animal. He had potential.”

“And everybody want to talk about the Second Amendment right. What about our children?” she asked. “They have a right to live.”

“This universal background check is a start,” Robinson asserted. “We need healing, you guys. And it’s a global thing. It’s beyond an epidemic. This is genocide in America.”