Pat Buchanan: Obama ‘Put His Presidency At Risk’ With Embrace Of Gay Marriage 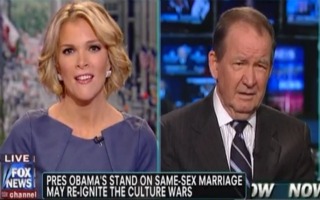 Former MSNBC contributor and conservative author Pat Buchanan appeared on Fox’s America Live with Megyn Kelly on Monday where he said that President Barack Obama’s recent embrace of gay marriage imperils his presidency. He said that gay marriage rights is the “heart of the cultural war” and that Republican voters are “right no riding to the sound of the guns” to get behind Republican candidate Mitt Romney as a result of Obama’s support for same-sex marriage rights.

What the President has done is forfeit – let me give you one example: North Carolina. Gay marriage – a ban on gay marriage won with 61 percent of the vote in a swing state where Obama carried just last week. If you go out to Iowa, where judges imposed gay marriage on the state, three judges were recalled and fired. I think the President has put his presidency at risk, because this is an emotional, cultural, moral issue. And when folks go to the polls, the overwhelming majority already in 30 states have imposed a ban on homosexual marriage.

Kelly noted that the turnout in that election where an amendment banning gay marriage passed was very small. Buchanan responded by saying that gay marriage bans pass during general elections with high turnout as well, and cited California’s 2008 vote against Prop 8 as an example.

Buchanan says that Obama can raise legitimate election issues against Republicans on economic and finance issues as well as cultural issues, but that he appealed to divisive social issues like this is, in Buchanan’s opinion, telling.

“Why would you take this cultural issue – this issue of morality – stir up the Republican base, the social conservatives, bring them out behind Mitt Romney where they are going right now and have this massive distraction,” asked Buchanan.

Buchanan went on to say that, if Obama truly did back same-sex marriage equality throughout the country, he would have adopted a policy proscription rather than a vague statement of support with no legislative agenda behind it.

“What’s considered, of the last 50 years, the great moral issue of our time? Civil rights,” said Buchanan. “Did the President believe the states should decide that?”

He says that Obama’s hedging on the issue of gay marriage indicates that the President is not genuinely supportive of gay marriage legislation. Furthermore, he says that while the Democratic base has responded positively to Obama’s announcement, Republican voters, too, are mobilizing in opposition to gay marriage. “They are right no riding to the sound of the guns,” said Buchanan.

Buchanan took offense to the suggestion by progressive groups that opposition to gay marriage is akin to bigotry.

“Is Billy Graham, Pope John Paul II – every pope throughout history –all these moral and religious leaders. Aquinas, Agustin. They were all too stupid to recognize the morality of homosexual marriage. It has been universally condemned throughout history,” said Buchanan. “This is the heart of the cultural war, Megyn.”