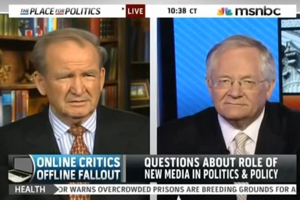 The Shirley Sherrod media fiasco is, by its nature, a sensitive and unusual case, with plenty of racial semantics pitfalls for even the most careful TV personality. When Pat Buchanan was asked for his take on this issue on MSNBC this morning, he tried to evade those pitfalls by evoking legendary civil rights activist Rosa Parks, and making an unintentionally insensitive bus metaphor.

Asked about Andrew Breitbart‘s role in the Sherrod mess, Buchanan argued that Breitbart merely published what he had, and that it was not Breitbart’s decision to immediately fire her. Instead, it was the White House and the NAACP that made the decision to trust Breitbart, knowing that he was a partisan against the Obama administration, and did no independent research of her own. As Buchanan puts it, they “threw Rosa Parks under the bus.”

It seems that Buchanan was attempting to ridicule the newfound national respect for Sherrod– an increasingly common talking point on the right, where the drums have been sounding from Bill O’Reilly and Ann Coulter. And it is true that “under the bus” is a very common saying in Washington for obvious reasons– especially since the 2008 election– but given the context of President Obama and the NAACP and the obvious racial issues at hand, one can’t help but think the bus “Rosa Parks” is being thrown under in this metaphor is, well, not so metaphorical.

Also notable in this clip is the way Buchanan frames Breitbart’s reputation. There is also a continuing narrative unfolding, more on the right than on the left, that Breitbart is just a “blogger” and that whoever takes him seriously does so at their own risk. The discrediting of Breitbart, one of the Tea Party’s most beloved leaders, is actually a pretty intelligent way of executing the full attack on the NAACP and the White House while keeping the greater American right’s hands clean. It might temporarily be cumbersome for Big Government exposés in the future (as the ACORN tape scandal almost was, as was the bizarre Mullah Mohammed Omar news), but ultimately takes all the blame and free will off of Breitbart, who is being consistently defined as a creature without rationality or self-control, rather than a respected, savvy figure who made a decision to publish a clip without context.

Video of the discussion below: