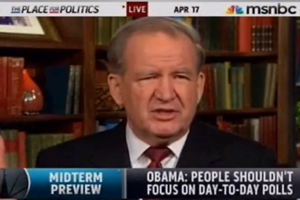 With a Democratic president’s approval ratings on decline and a loud right-wing opposition, many pundits are harking back to the Clinton days when then-Speaker of the House Newt Gingrich signed a Contract with America that got Republicans a 60-seat gain in Congress. Pat Buchanan joins them, but only to bash the Contract as “one of the most overrated things in politics.”

Asked if he believed the key to Republican success in November was a comprehensive political platform on which all candidates could run, Buchanan vehemently disagreed. When the 1994 “Republican revolution” happened, he argued, “people weren’t out there cheering for the Contract with America… the idea of putting out some great big program is silly.” Having a solid platform with a party that has a very flexible spectrum of ideas is to divide the party, he concluded– “it leaves you to attack. The best thing the outparty has is its mobility. It is on the attack constantly.” Instead, he suggested Republicans rally around the things which the agree unanimous on, many of which aren’t necessarily policy ideas:

“the Republicans ought to get off this idea of putting together programs or ideas that divide our coalition right now. What are we all united on? We don’t like health care, we don’t agree with Obama and the administration, we don’t like all those liberals, we don’t like Pelosi and Reid. You’ve got your tickets right there! Go after them. Wait for 2011 for individual candidates like [Mitt] Romney, and Ron Paul and [Sarah] Palin to put out their ideas”

Note a certain 2012 presidential hopeful that may or may not have written the Contract with America is notably absent from Buchanan’s GOP presidential short-list.